June 13, 2014: The next International Union election will be held in 2016. What will it take to elect new Teamster leadership?

Two years from now, the IBT Convention will be held in Las Vegas to nominate candidates for General President and all 28 International officers.

Will there be reform delegates from your local union? Who will be nominated there? What will it take to win and how can we get started now? 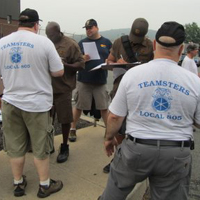 The Vote No movement showed that a majority of Teamsters in key industries oppose Hoffa-Hall’s concessions. What happens now that the national contracts have been settled and, in the case of UPS, imposed on the members?

Will Teamsters opposed to concessions become a force for change? That depends on what Teamsters like you do now. Being fed up won’t do the job.

We need a united, national campaign organization of members in every industry working together to channel that anger into votes for change.

Members are forming a network, Take Back Our Union, to start the education process, build local committees of members who will run for convention delegate and nominate and support a coalition of candidates.

Initial meetings are being held and more will be scheduled.

Hoffa and Hall have a built-in campaign organization: they have a huge payroll with over 100 officials getting multiple salaries from the IBT. Hoffa and Hall don’t have to start early because they have already have a fundraising and campaign patronage machine.

We need a different kind of machine, a grassroots army of Teamster volunteers.

How the Election Works

The IBT Election is governed by Election Rules and overseen by an independent Election Supervisor.

Ballots will be mailed to all Teamsters in October 2016, but the election process starts nearly two years before that, when an Election Supervisor is named.

Members in every local union elect convention delegates to represent them at the Teamster Convention where candidates for International Union office are officially nominated.

In the last election, many locals where members voted against Hoffa were represented at the convention by officers who nominated Hoffa-Hall and tried to keep all opposition candidates off ballot.

It’s up to active members to make sure that doesn't happen again. We need to start organizing now and forming local committees.

Hoffa has been able to win the last three elections with 60-65 percent of the vote. To defeat him, it will take about 200,000 votes. What will it take to achieve this goal?