Who Can Baltimore Teamsters Trust? 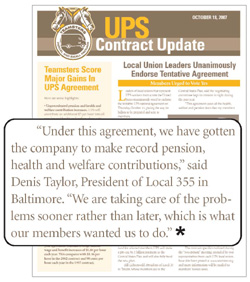 Here’s what Taylor had to say when he was selling the UPS contract back in October: “Under this agreement, we have gotten the company to make record pension, health and welfare contributions. We are taking care of the problems sooner rather than later, which is what our members wanted us to do.”

“Did Taylor know cuts are coming back in October? Or did he not know the situation our fund was in?” asks Gary Payne, a Local 355 feeder driver. “Either way, I can’t trust him to manage my pension anymore.”

Payne and other Local 355 Teamsters are getting organized to run for local union office this fall.

In New York Local 804, UPS Teamsters voted to reject the UPS contract. They won improvements that restored their pension benefits. “I want to know why Taylor didn’t hold out until our pension issues were fixed.” Payne says.

“In the end, he was just a rubber stamp for Hoffa’s contract. He didn’t take care of our pension problems.”

What do you think? Click here to send a question or comment to Teamsters for a Democratic Union.