Remembering the History of the Pension Fight

As I sit on my back porch this beautiful Sunday morning in Georgia and look at that coffee cup, I am as proud to be a Teamsters Retiree as ever, and I hope you are too! 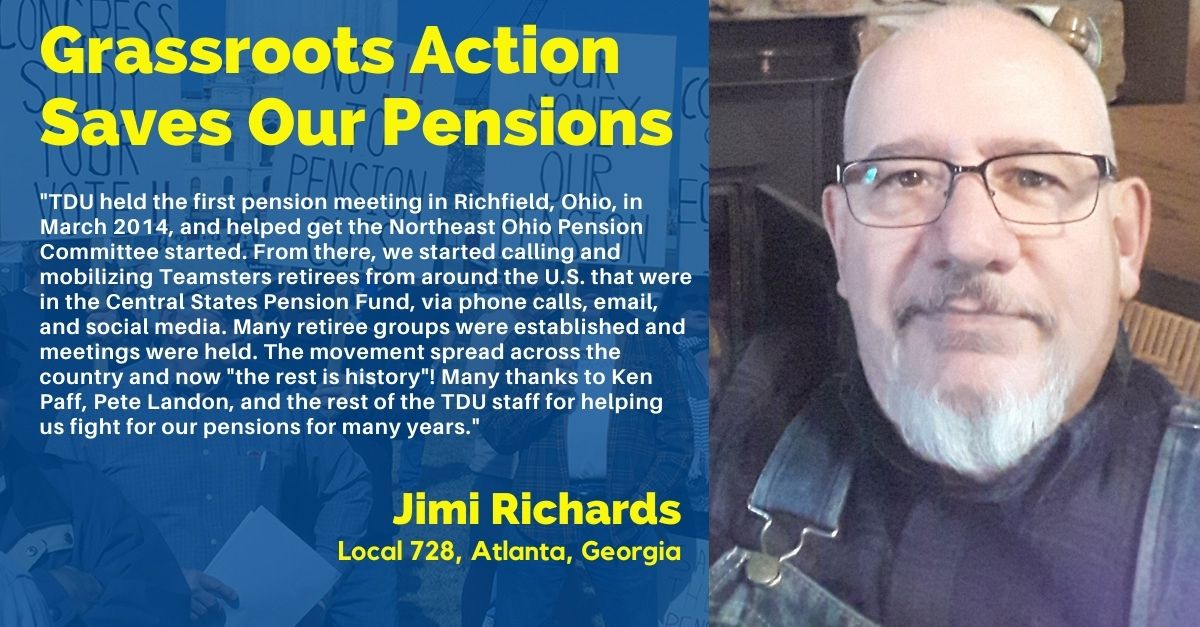 It was around this time 8 years ago when I, as well as many other Teamsters, was contacted by Ken Paff and he told me that my pension could possibly be cut by as much as 60%! It was hard to believe until I saw this...

It was TDU who sparked our pension fight in 2013 and it was retirees, like Alex Adams and then active participant Ben Sizemore, who went to one of the first hearings in Washington, DC that fall. Then in March of 2014, TDU held its first pension meeting in Richfield, Ohio, and helped get the Northeast Ohio pension committee started. Their movement spread across the country and now "the rest is history"! Many thanks to Ken Paff, Pete Landon, and the rest of the TDU staff for helping us fight for our pensions for many years. When we were notified later from Ken Paff that our Pension Cuts were in a spending bill about to be voted on in December 2014, we started mobilizing Teamsters Retirees from around the US that were in the Central States Pension Fund, via phone calls, email, and social media. When we called the IBT about it, it took six days for a response and it was a letter to Congress stating opposition just 6 hours before the vote. Many had stepped up but still the Bill was passed to cut our pensions by 20%.

Teamsters Retirees were not going to take these cuts without a fight. Many Retiree groups were established and meetings were held. Later in April 2015, Teamster retirees from around the country went to Chicago to picket all day at a meeting being held by Central States Pension Fund for all IBT Locals to explain possible cuts to our pensions. NO retiree was allowed in, even though retirees and their spouses lined the sidewalks picketing outside the meeting.

After the meeting, Local 89 President Fred Zuckerman rented a hotel meeting room and discussed with us what was going on. He was one of very few local officers who would even come out and talk to us.

Over the next few months, the grassroots committees got together and formed one group to be the nucleus for all groups to set up meetings, rallies, and communications with all groups involved. That was when the National United Committee To Protect Pensions (NUCPP) was established. Over the years they set up hearings to have ALL Teamsters who were going to be affected by these cuts testify before Committees and eventually the whole truth came out as to how the Bill was established to try and cut our Pensions by no fault of our own. Many of you know the history of the 1980 Deregulations of Transportation and then later President Reagan placed CSPF into Trusteeship to a group of Wall Street Investors with no checks and balances, not even an oversight committee to watch over their investing practices. After hundreds of hours of testifying, the Federal Government stopped us at CSPF from suffering any cuts until a solution could be found.

Over the next few years meetings with Congress were set up and hundreds of Teamsters Retirees roamed the halls of the US Capital meeting anyone who would set down and listen. The Retirees even held rallies on the Capital lawn several times when others were there to meet with Congress.

NUCPP kept the course, even though some tried to spread rumors that Mike Walden, Bob Amsden and others in NUCPP were supporting cuts to our Pensions, and formed other groups on their own to try and take over NUCPP’s work. They told lies and rumors as to what was going on, and all during this time, NUCPP stayed on course through many ups and downs, many times the Butch Lewis Act was removed from several Bills only to be told later we will get it on another. The can kept getting kicked down the road until all these stimulus bills arose during the Pandemic and NUCPP kept holding their feet to the fire, only to have it removed from the bills again.

Then came the 2020 Presidential elections and President Biden came in and as the whole Labor movement held its breath, Senators Warnock (D-GA) and Ossoff (D-GA) won the biggest Senatorial election in history and put the Senate on a level playing field at 50/50. This was our biggest chance to get the Butch Lewis Act passed. It was changed to read the Butch Lewis Emergency Pension Plan Relief Act of 2021 (EPPRA) and the battle continued. All during this time, NUCPP was on the frontlines meeting with Committee members of Congress and their staff, using any and all ways to lobby to get this on the Bill and to get it done. In the many emails to follow, Dana Vargo at NUCPP always mentioned “All In And Done In 21'" as the name of this mission in securing ALL Pensions for Teamster Retirees, present and future.

On March 6, 2021, even though Senator Grassley (R-IA) tried to have it removed from the Bill at 03:30 am and his amendment was voted down, the EPPRA was kept in at 50 to 49, with ALL Democrats voting for us. Not one Republican voted for us.

Late that morning history was made, as the Bill as a whole was passed 50 to 49. Not one Republican Senator gave a damn about our Teamsters Retirees and our Pensions.

Thank you NUCPP, Retiree Committee Groups, and TDU for staying the course!