Teamster Convention: What’s At Stake & How To Watch It

The IBT Convention will be held June 22, 23, and 24, online.  Around 1600 delegates elected from Local Unions will vote on amending the IBT Constitution, and will vote on who to nominate for IBT President, Secretary Treasurer and General Executive Board.

Do you want to observe the Convention online?  Here is what you need to know. 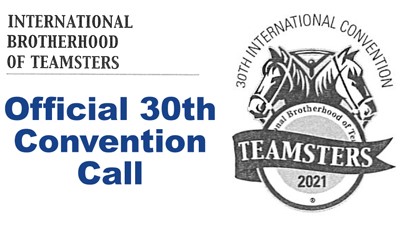 When is the Convention

The IBT Convention will last three days: Tuesday June 22 through Thursday June 24.  It is scheduled for Noon – 6 pm Eastern Time each day, with a 90-minute lunch break.

The exact schedule has not been issued. Reportedly Tuesday will be mostly speeches and tributes to James Hoffa. Wednesday may include most or all the Constitutional issues and votes.  On Thursday, delegates will vote on nominating candidates for IBT office.

How to Watch it

Members will be able to observe the Convention at this web portal.  This website is not live at this point. It will be activated at the start of the Convention on June 22, and no password will be needed.  We will update the schedule and other details as information becomes available.

The convention app can be downloaded through Apple or Android for phones or tablets by searching "Teamsters Union." The Convention website will be www.teamster-app.org. Both will be live with content on Monday, June 14.

The Convention will begin to chart the future of the Teamsters Union, by amending the IBT Constitution, and nominating the two competing slates to lead the IBT.

The IBT Constitutional issues expected to come up include:

Two competing slates with different visions will be nominated on June 24.  The Vairma-Herrera Slate is backed by James Hoffa, and represents more of Hoffa’s failed policies.

The O’Brien-Zuckerman Teamsters United slate stands for a new direction and is running on a platform of rebuilding our union’s power by uniting and mobilizing the members.

When Do We Vote?

The Convention is just the beginning. The campaign will heat up over the summer and culminate this fall.

Ballots will be mailed to every Teamster member in mid-October and counted in mid-November.