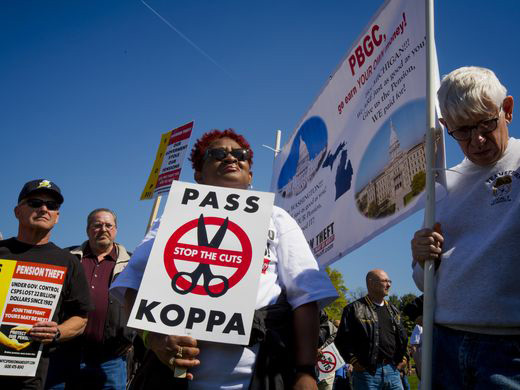 If you read one thing on the pension cut crisis, make it this top-notch article from Cincinnati.com.  Includes an inspiring video about Rita Lewis, who lost her husband and best friend and became the voice of hundreds of thousands fighting for their pensions.

WASHINGTON – A West Chester widow stood in front of a sea of gray-haired retirees, mostly men, some with walkers and others wheeling oxygen tanks, who traveled across the country to demand what was promised to them.

Prepared to rally against what could be the biggest cut to the largest multi-employer pension fund in U.S. history, retired Teamsters exited bus after bus that pulled up to Capitol Hill's Western Lawn on a warm Thursday morning. They came from as far as Florida, Texas and Wisconsin. Many paid out of pocket for the trip.

“A promise is a promise is a promise,” Rita Lewis said, clutching her speech that afternoon, gazing out to the crowd of more than 3,000 retired truckers, organizers and active Teamsters. “We the people have worked hard for our pensions and now they want to take it away from us. This is unfair."

Among the prepared speeches given by members of Congress and organizers, Lewis stood out as the only civilian with access to the microphone.

The speech was supposed to be delivered by her late husband, Butch Lewis, head of the Cincinnati Retired Teamsters Club. He died New Years Day of a stroke.

Rita Lewis believes the stress of the cuts killed him.

Although Butch Lewis was not at the rally, his photo was taped onto the speakers' podium, supporters wore patches bearing his name and they held signs with the late labor leader's face.

As a widow, Rita Lewis is set to lose about $4,000 per month. She has already made plans to sell the family home in preparation for the cuts set to take effect July 1.

Lewis' story is a common one for the more than 4,100 Greater Cincinnatians, 48,000 Ohioans and 410,000 other retirees and active Teamsters nationwide who received letters in September last year, detailing the percentages of how much they would lose. Locally, retirees are saying they would lose as much as 50, 70 and even 90 percent of their pension benefits. They fear they will lose their homes, or even end up homeless.

This is the story of the people affected by a law passed through an omnibus bill at the 11th hour, people who learned they would be let down not just by their retirement fund administrators, but by their union, the federal government and the elected officials who claim to support them. Some of those officials helped turn the pension cuts into law.

And whatever happens to this small group of Americans will set a precedent on what can happen to other retirement funds in the future.

The legislation that led to the cuts

The Teamsters' $16.1 billion pension fund applied to Congress in 2014 for authorization to cut pension benefits through the Kline-Miller Multi-employer Pension Reform Act. The pension fund claims that if cuts are not made in the immediate future, the fund will go insolvent in 10 years.

The pension reform act was enacted on Dec. 16, 2014, after the law was placed into the 2015 Omnibus Spending Bill.

In order for the reductions to take place, Central States trustees must show the Treasury Department that the proposed reductions will keep the plan from running out of money. Pension authorities have stated, however, that under the reform act, the likelihood of the plan going insolvent is still 50 percent. A representative from Central States could not be reached for comment.

Kenneth Feinberg, a federal mediator with the Treasury Department, has until May 7 to decide, after reviewing the 8,000-page Central States application to reduce benefits.

Feinberg has attended town halls in eight states, including Ohio, to discuss the Central States plan. Each town hall drew thousands of retirees who echoed the same emotions: anger, desperation and deep disappointment with the ease with which their retirement benefits could be stripped from them.

Feinberg wrote in his latest statement, "Retirees have complained to me that they feel when Congress passed this law, it was done with very little public input. I have been committed to making sure they feel the opposite is true of our review of the Central States Pension Plan’s application."

That could go over well with retirees who feel they are on the brink.

"We had zero say in this, no one even consulted us in what we wanted," said Eddie Hernandez, a Chicago retiree at the Washington event, who will see a 63 percent reduction in his benefits down to $916 per month. "We want every single penny of our pensions and we shouldn't have to negotiate it back."

The pension was our bedrock'

At the rally in Washington, no matter what state they came from, or which Teamsters local they represented, attendees wore similar shirts sporting their movement’s slogan: “Keep Our Pension Promises.”

The consensus among experts, activists, professors and retirees themselves is that the plan would devastate the finances of the retired Teamsters nationwide and could have a significant economic impact.

"This was our bedrock," said Linda Krekeler, 62, whose husband Tom Krekeler retired from truck driving in 2004. "We had our 401(k), social security, and everything planned out, but the pension was our bedrock."

This is the first time since their marriage in 1988 that the Colerain Township couple have been able to spend their days together. No more weeks apart, disjointed schedules or nights sleeping alone.

In September, the couple got their letter from Central States about the pension cuts. Just last month, Tom Krekeler was diagnosed with prostate cancer.

"It's all we think about, we talk about it every day –- how are we going to survive?" Tom Krekeler said. "We'll have to sell a lot of things. We'll figure out a way to make do."

Tom Krekeler has in many ways, taken over the role of leader that Butch Lewis has left after his death. His hair is grayer and he says he’s more tired than he’s been in years. It’s a common theme among the retirees.

Complicating matters, the Pension Benefit Guaranty Corp., which would insure losses in the event of a pension crisis, is facing a potential insolvency of its own down the road. The federal agency published a report in late March showing that its plan program faces a 43 percent likelihood of insolvency within 10 years if the current level of people paying into the fund remain in place.

Plenty of blame to go around

Olivia Mitchell, a professor of pensions at The Wharton School of the University of Pennsylvania, said she wonders how the International Brotherhood of Teamsters heads could sit by and allow the pension fund to lose so much money.

"The basic problem was that contributions put into the multi-employer pension plans were not sufficient to make good on the benefits promised," Mitchell said in an email. "And the so-called “guarantee” offered by the PBGC was quite small, far less than the benefit formula suggested people would get."

"Why the union leadership agreed to that arrangement seems like the key question," Mitchell said.

Ken Paff, head of the Detroit-based Teamsters for a Democratic Union, questions if corruption and a lack of action by the International Brotherhood of Teamsters are contributing factors to Central States' losses. The union is not actively organizing for new members, he said.

James P Hoffa, current president of the union, negotiated the withdrawal of United Parcel Service, the pension's biggest employer, from the pension fund in 2007. Although the company had to pay more than $6.1 billion to shore up the plan, it also resulted in 238,000 fewer young, active member payers into the pension fund.

"He let go of a whole group of young workers who would've put into that fund," Paff said.  "A lot of people won't forgive him for that."

At the rally, Hoffa told The Enquirer he thinks the number of people critical of the union are few and far between, and simply anti-union.

"Maybe you've got a handful of people who are critical, but largely people support us," he said.

John Murphy, Eastern Region vice president of the brotherhood, said people don't understand the Teamsters have little power over the pension fund because the U.S. Labor Department took control in 1982.

"I wish people understood that we don't have power over the fund," he said.

The Labor Department has monitored the ­Teamsters union retirement fund ever since. The agency obtained a federal court-ordered consent decree in 1982 ­following its own investigation of gross mismanagement of the fund and self-dealing by fund managers. The union does have some power over who can be a pension fund trustee, however.

Last December, the Enquirer attended a town hall meeting with one Central States trustee, Bill Lichtenwald, who was appointed by the Teamsters to the Central States board.

After acknowledging the trustees spent $6.1 million of retiree pension money lobbying for the cuts, Lichtenwald resigned his trusteeship of the pension fund.