Major political and labor leaders vowed to back pension protection for retirees at a rally of 400 people in the Minnesota State Capitol rotunda in St. Paul on Tuesday. 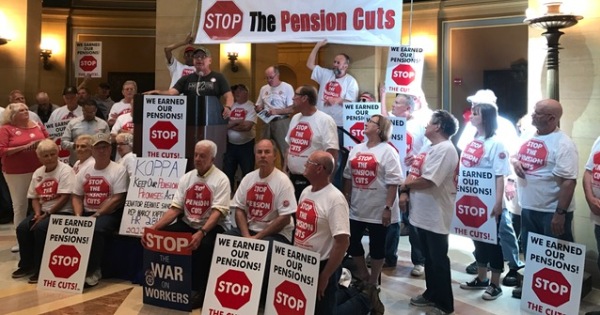 The speakers included three Minnesota Congressmen: Keith Ellison, Tim Walz and Rick Nolan, along with Minnesota Attorney General Lori Swanson. All of them deplored the threatened pension cuts at the noisy, boisterous rally of retirees, family members and supporters. Other speakers included Julie Blaha, Secretary Treasurer of the Minnesota AFL-CIO, Erin Parrish, the Associate Director of Minnesota AARP, and representatives of US Senators Al Franken and Amy Klobuchar and US Rep. Betty McCollum.

A representative of the Minnesota Nurses Association also spoke. After speaking, US Reps. Nolan and Walz joined with retirees in holding up a large "Stop the Pension Cuts" banner and Walz led the crowd in a chant of "Stop the cuts."

The rally was chaired by Steve Baribeau, a retired Teamster truck driver and a member of Save Our Pensions — Minnesota.

This rally was one of dozens of events around the country held to coincide with the introduction of the Keep Our Pension Promises Act (KOPPA) in Congress by Marcy Kaptur (D-Ohio) and in the Senate by Bernie Sanders (I-Vermont). Mike Walden, President of the National United Committees to Protect Pensions, was in Washington to speak to a packed press conference along with the Pension Rights Center, the mineworkers union, the machinists union, and Senators Sanders, Baldwin (D-WI) and Franken (D-MN). 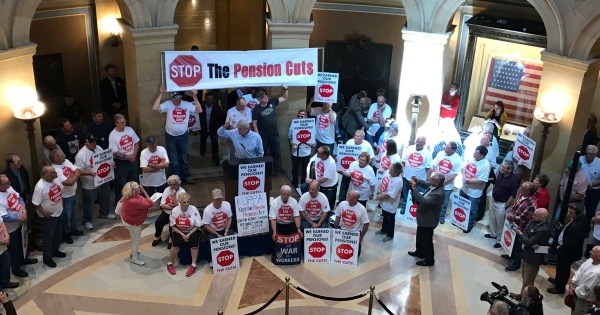