Teamster mechanics picketed United Airlines at the San Francisco, Houston and Orlando airports on Friday in an escalation of their fight for an industry-leading contract. 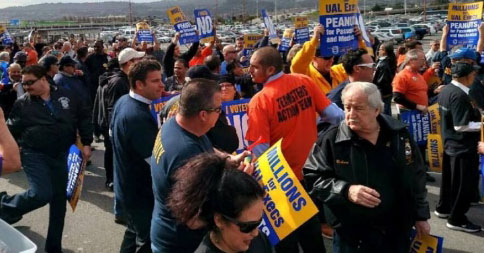 Members have voted by 93% to reject management’s final offer and authorize the Teamsters to move toward a strike.

Over 9,000 mechanics at United belong to the Teamsters. The union will petition the National Mediation Board for a strike release.

The contract showdown at United Airlines is a story of runaway corporate greed.

Mechanics took concessions when the airline was in trouble, including wage freezes, pension cuts, and subcontracting of jobs.

United made $4.5 billion in profits last year—but management is demanding more concessions including a two-tier wage scale for new hires.

Members are fed up, speaking out and fighting back.