Smashed windshields. Threats of broken bones. Blood smeared in the home of a union reformer. Is this what should happen when good Teamsters run for office in New York? 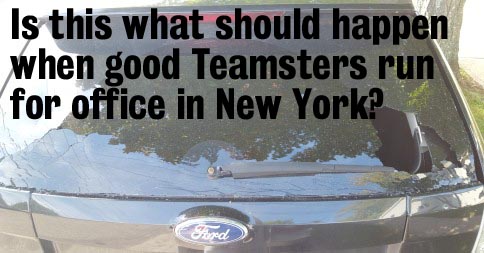 First, a thug called Local 553 reformer Stephen Mohan and threatened to break both his legs.

Less than 48 hours later, Michael Cinelli, another rank-and-file activist with Members United, had his car windshield bashed in.

When that didn’t stop him, they broke into his home and smeared blood near his 1½ year-old-daughter’s Exersaucer.

But members are not backing down. The 553 Members United for Reform Slate will be nominated for local union office on Tuesday, Nov. 10.

Last year, Mohan, Cinelli and a reform movement of dairy Teamsters were weeks away from winning local union office in Local 584.

To stop them, Hoffa put their local under emergency trusteeship and merged it into Local 553, with no vote by the members. Local 553 is headed by Demos Demopoulos, who told allies the merger was to prevent “another TDU local” in New York City.

When TDU members first started organizing in the school bus industry, their candidate for shop steward had his windshield smashed by a hammer-wielding thug.

The National Labor Relations Board found Gatto guilty of making a violent threat against a TDU member: “If I had a beef with you, I wouldn’t break your windows. I’d break something else.”

It’s time to draw the line against thug tactics and union officials who won’t stand up to employers, but will step all over their own members. Local 553 is a good place to start.

Click here to stand up against retaliation and support rank-and-file members of Local 553 who are organizing to take back their union.