With the future of the Teamsters Union at stake, the International Union election outcome comes down to this: turnout.  If Teamsters United volunteers can boost turnout, Fred Zuckerman will be the General President, and our union will be on the road to recovery. 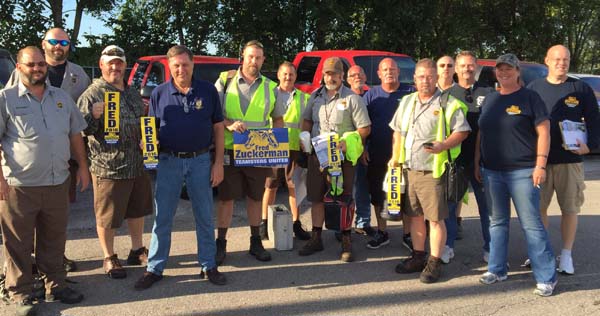 Low voter turnout favors Hoffa. He has name recognition. He has hundreds of officials on the IBT payroll who turn out the vote for him. They donate big money too.

That’s how Hoffa built a campaign war chest—and he’s using it. The Hoffa Campaign is spending over $1 million on GOTV mailings and robocalls, according to Election Supervisor records.

Hoffa is counting on many members to mark the only name they know—or to vote the way their BA tells them to.

The Hoffa Campaign is also investing heavily in negative advertising: mailers and robocalls that lie about Fred Zuckerman. The purpose of these negative attacks isn’t to win members over; it’s to discourage voter turnout among Teamsters who would otherwise vote for change.

How Fred Can Win

Fred Zuckerman and Teamsters United can win the election—but only by increasing turnout. Hoffa will get his share of votes. If we can turn out 150,000 to 175,000 votes, Fred will win.

One key battle ground is the national contracts where Hoffa-Hall have negotiated unpopular contract givebacks and benefit cuts.

Over 300,000 Teamsters are covered by the contracts in Freight, UPS, UPS Freight, and Carhaul.

Increasing voter participation in the national contracts from 25% to 40% would mean 45,000 more votes.

Teamsters United volunteers have spent more than a year reaching out to Teamsters in every industry—school bus, warehouse, construction, public employees, food distribution, beverage, to name just a few.

To win, we have to go back to these members again and again until they’ve returned their ballots.

Think about your local—and what can be done to increase turnout. Now set a goal for this time—and make a plan for reaching that goal.

If you want to know the vote totals from your local last time, just click here and TDU will get you the info.

On Saturday, Fred Zuckerman is holding a national conference call to share the best strategies for getting out the vote. Join the call to share your ideas—and hear other people’s.

On November 14, Teamsters United will begin posting local-by-local results from the ballot count.

Make a GOTV plan to increase turnout in your local and keep working it so you can celebrate the results come November.

Act like your future depends on it – because it does.

Click here to send Fred a message with your GOTV plans, and tell the campaign how they can help.