Hoffa-Hall running mate Brian Buhle has been fined by the Election Supervisor after two of his goons threatened to mash a member’s head in at the Teamster Convention. (reprinted from Teamsters United) 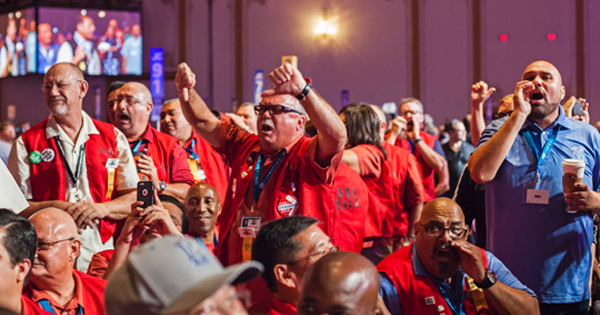 Buhle is a Central Region Vice President and candidate on the Hoffa-Hall Slate.

The Election Supervisor ordered Buhle and two Local 135 delegates to pay a fine of $500 and to cease and desist from making threats against members.

When Tim Carroll, an elected Convention Delegate, spoke out in support of Teamsters United on the Convention floor, Buhle cursed at him and told him to leave.

Two enforcers from his local sprang into action. They bumped Carroll, told him to “shut the f---- up” and “let’s take this outside. They threatened to “kick his ass” and to “mash [his] head in.” (Protest Decision 2016, ESD 279).

Investigators noted that Buhle and his co-defendants contradicted each other’s testimony and “exhibited little credibility.”

They were ordered to pay a fine and a notice will be posted at all Local 135 and Local 357 worksites.

The real remedy will come on October 6 when Teamster members can vote out Buhle and the rest of the Hoffa-Hall slate.