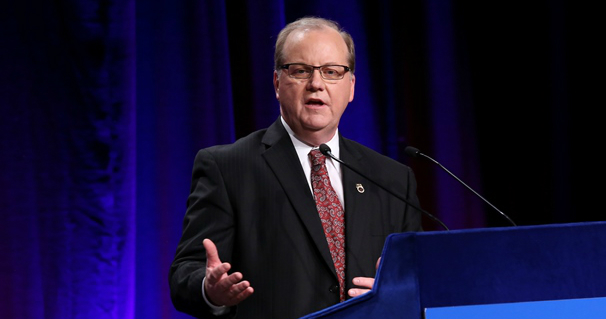 Addressing a meeting of Teamster local officers before the UPS national grievance panel in San Antonio, Ken Hall announced that he will step aside from future UPS contract negotiations to concentrate on being General Secretary Treasurer and to focus on pension issues.

Is that a good thing?

Ken Hall’s record at defending Teamster pensions and benefits is not pretty—to put it mildly.

The last time that Hall focused on pension issues he let UPS withdraw from the Central States Pension Fund.

The deal saved UPS big-time, but it sealed the fate of the Central States fund.

Without contributions from the union’s biggest employer, Central States will go insolvent within a decade, unless the federal government saves the plan by passing pension reform.

Hundreds of thousands of Teamsters and retirees are threatened with losing their pensions.

And what about the 50,000 UPS Teamsters who are covered by the IBT-UPS pension plan that Hall created? They get the lowest pension benefits of any UPS Teamsters in the country.

Ken Hall didn’t start the decline of the Central States Pension Fund. But he finished the job by putting the decisive nails in the coffin.

Now, he’s going to focus on pension issues? How much more of Ken Hall’s “help” can Teamster members take?