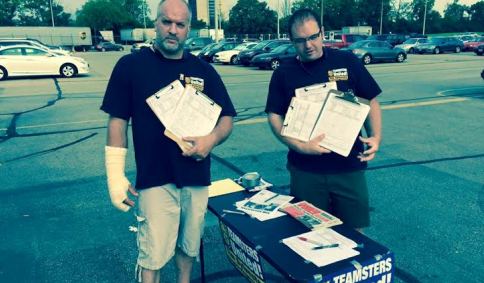 In just ten weeks, grassroots volunteers collected over twice as many signatures as the Teamster United needs to get accredited, the most signatures by an opposition slate in at least two decades.

As accredited candidates Teamsters United will have the right to publish campaign ads in the Teamster magazine and they get a copy of the entire Teamster membership list so they can reach out directly to members.

TDU members are proud to be part of the successful petition drive and we’re gearing up for the next phase of the campaign.

Candidates, even accredited candidates, don’t have an automatic spot on the ballot.

To get on the ballot, candidates must be nominated at the Teamster Convention in June 2016 by at least five percent of the convention delegate in each region.

That means we need to elect hundreds of convention delegates who will nominate Teamsters United candidates.

Convention delegate elections will be held in all local unions—with most elections being held between January and April 2016. These elections are overseen by the Election Supervisor.

In the last election, many local unions whose members voted against Hoffa in the election were represented at the convention by officers who nominated Hoffa and Hall and tried to keep all opposition candidates off the ballot. We can’t let that happen again.

TDU is already organizing workshops and trainings for Teamsters who are interested in fielding a slate for convention delegate. We’ll explain the rules and how to organize a winning campaign.

It will take about 200,000 votes to win the election when the ballots go out next October. That means we have a little over a year to build a grassroots network that can reach 200,000 Teamsters and turn out the vote for Teamsters United.

TDU members are working with Teamster officers and members to build campaign committees that can accomplish this goal.

We’ll be holding strategy sessions and trainings for campaign volunteers at our upcoming TDU Convention.