Rank-and-file pressure has forced Hoffa to say the right things about pension reform on Capitol Hill. Now it’s time for him to DO the right thing and stop the rush to pension cuts in the Teamsters own Central States Fund. 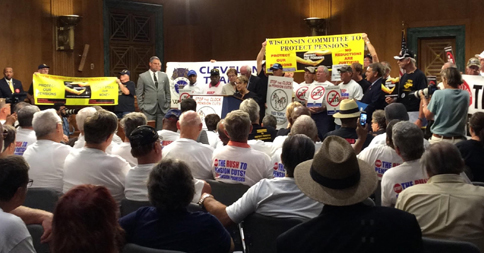 Now Hoffa is up to his old tricks. Today, he appeared at a press conference with Senator Bernie Sanders and and others political leaders to support the Keep Our Pension Promises Act to stop the benefit cuts allowed by the new law.

It’s good that Hoffa is taking the right position on this important pension legislation. But the hundreds and thousands of members and retirees facing the worst pension cuts in Teamster history need more than photo ops from Hoffa.

It’s time for Hoffa to take action to stop the rush to pension cuts in the Teamsters own Central States Pension Fund.

Teamster members and retirees are calling for an independent audit of the Central States Pension Fund so that alternatives to the Fund’s drastic cuts can be considered by pension experts.

It’s a more than reasonable demand by members and retirees who deferred wage increases so they could have pension benefits they could survive on in retirement.

Not a single Hoffa administration official has spoken out against the Central States pension cut plan.

Grassroots pressure has finally forced Hoffa to say the right things about pension reform in Congress. It’s time for him to DO the right thing and take action to stop the rush to pension cuts in our own union.