A leaked email from the Central States Pension Fund Director obtained by TDU blasts Hoffa for pretending to oppose pension cut legislation that he actually supports. 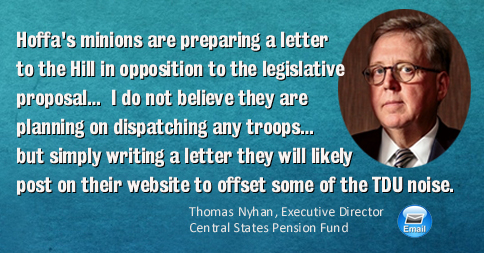 When legislation was first being drafted on Capitol Hill in late 2013 to allow pension funds to slash retirees’ benefits, Hoffa made a last-minute show of opposition, even issuing a public statement denouncing the proposed legislation.

It was a strange move. After all, Hoffa is on the board of directors of the group which proposed the pension cut bill. Now we know the truth.

A leaked email from the Central States Fund Director obtained by TDU shows Hoffa’s letter was just a PR stunt.

The PBGC Director was concerned about a rumor that Hoffa would oppose the pension cut proposal and asks for advice.

Nyhan’s email lays out the real story and pulls no punches.

“[Hoffa’s] minions are preparing a letter to the Hill in opposition to the legislative… I do not believe they are planning on dispatching any troops to the Hill or making any visits but simply writ[ing] a letter they will likely post on their website to offset some of the TDU noise.”

No troops. No Capitol Hill visits. No action. Just a post on the website to try to counter TDU.

Nyhan’s email is a rare look at how Hoffa and other top officials are playing politics with Teamsters’ pensions.

The Central States Director suggests Ken Hall might be willing to convince Hoffa to openly support the pension cuts, but “he has his hands full with the UPS vote.”

Nyhan blasts Hoffa for pretending to oppose pension cut legislation that he actually supports as a, “A true profile in courage.”

It’s a sad day when Teamsters can only get the straight story on where the General President stands on theirs pensions when TDU obtains a secret email from Central States director.