Shocking emails from corporate execs reveal blow-by-blow how corruption works in the Hoffa administration–and how it leads to concessions.

Anti-corruption investigators have released emails from Southern Wine & Spirits (SWS) executives and top Hoffa administration officials that detail step-by-step how Hoffa running mate Rome Aloise sold out members to secure free tickets to a Playboy party from corporate executives—and a vacation to Paris paid for with your dues money.

The corruption trail begins in Minnesota where Teamster members at SWS, the nation’s largest liquor distributor, unanimously rejected a contract in a bid to raise union standards in their industry.

SWS bosses were furious and called in Hoffa-Hall Vice President Rome Aloise to take over the negotiations and push through the deal that management wanted.

In an email dated January 30, SWS negotiator Stuart Korshak said Local 792’s secretary treasurer Larry Yoswa “is weak and follows his members….Rome has led the negotiations for the Minnesota [sic] all day…We will get a good deal done tonight.”

In the exact same email, Korshak reports to higher-ups, “Rome wants to get six tickets for Hoffa’s team to the liquor industry’s party at the Super Bowl this weekend. Can SWS help?” 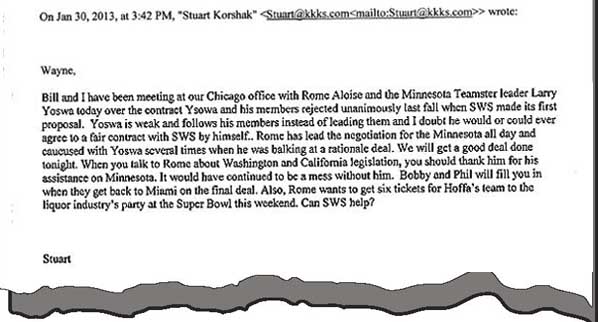 Another email reveals that the party was “The Playboy Party Presented by Crown Royal”—the “most exclusive party in town during New Orleans’ highly-anticipated Super Bowl weekend”— and that the tickets were for Hoffa’s Chief of Staff W.C. Smith. "This must be the one," Aloise emailed the SWS negotiator.

The following day, Korshak reported in an email that, “Rome was terrific…. [Yoswa] wanted to walk out on us but Rome wouldn’t let him and finally forced him to take what we offered,” including “less of a bonus than the additional money we were prepared to give.”

The corporate negotiator gleefully reports that Yoswa had to “publicly agree in front of Rome” to recommend a 14-month deal that would expire two months after the local’s contract with another liquor distributor Johnson Brothers. SWS wanted the weaker Johnson Brothers contract to be used to set lower standards for all the Teamster contracts in the state.

In the meantime, Aloise was busy wheeling and dealing for perks of his own.

Aloise wrote to Hoffa’s Chief of Staff asking for the International Union to pay for his trip to France. The cover for the request is to attend Dannon Yogurt’s annual meeting but the email reveals Aloise’s real motivation. “I am going to bring Deb and spend a week so I need to know if it is ok to go so I can get my arrangements and then make hers.” Aloise reports, “The coach ticket is $1,300, unless of course you want to authorize business class.

On January 30, Aloise reported to Smith that he was, “working on your tickets to the Liquor party. In your name, right?” The same day Smith approved Aloise’s trip to Paris and the circle of payoffs was complete. The Aloise-Smith emails are here.

Anti-corruption investigators took depositions, obtained hundreds of pages of emails and exhibits, and scrupulously documented the corruption. The Independent Review Board (IRB) issued a report of recommended charges seven months ago. All of these emails and more are included in the report.

But Hoffa-Hall ignored it all and proudly nominated Aloise as their running mate four months after the corruption report was issued. Hoffa’s Chief of Staff WC Smith remains on the job.

Now, Smith and Aloise are at the center of a new corruption probe into racketeering, including lavish employer gifts to top Teamster officials who rigged the bidding process for business with Teamster benefit funds.

Hoffa-Hall will never end corruption, but Teamster members can by electing Fred Zuckerman and the Teamsters United slate when ballots are mailed on October 6.