Opening the Door to Transform the Teamsters: A Pivotal TDU Convention

Teamster leaders and activists prepared to Get Out the Vote, elected new TDU leadership, and set our organization’s goals and strategy at the TDU Convention, October 1-3 in Chicago. 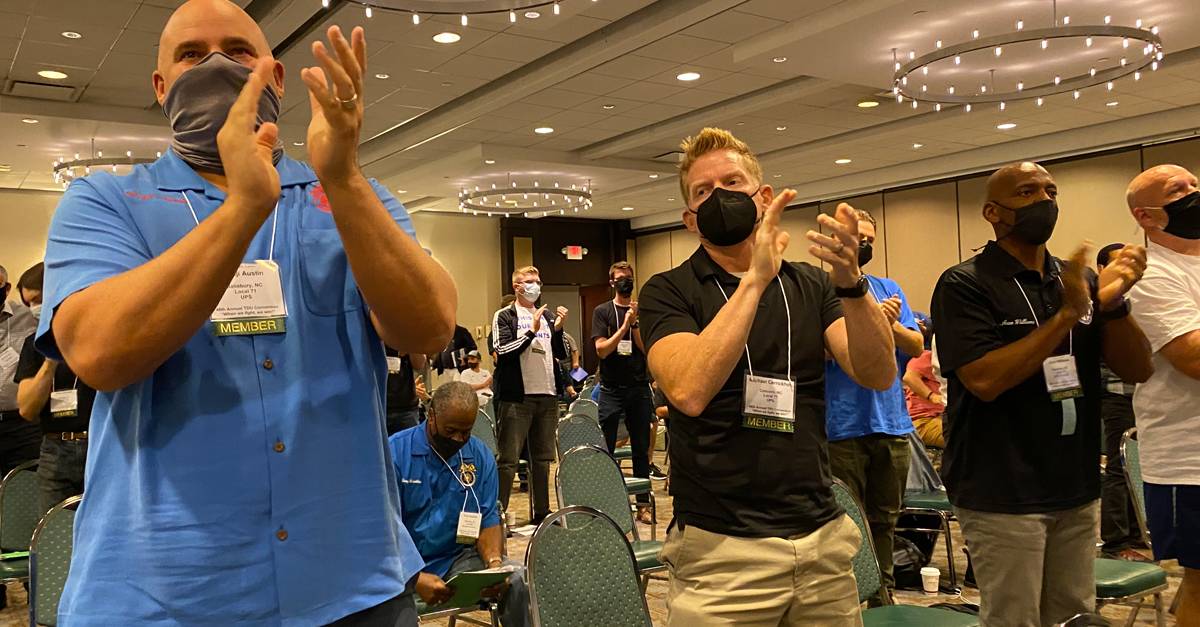 The Convention was perfectly timed: the ballots in the IBT election were mailed the next day, on October 4.

Outgoing TDU National Organizer Ken Paff told the Convention that election of the O’Brien Zuckerman slate was like “opening a door.” He continued, “Teamsters want a leadership that doesn’t shut doors on members, but says ‘When members want to fight, we’ll be there with them, shoulder to shoulder.’”

A number of Teamster United candidates were present at the Convention, and participated in a roundtable dialogue with activists on the future of our union.

Sean O’Brien told the Convention in his speech, “Our coalition with TDU, Teamsters United, and anyone else who wants to take on the fight against employers will last well beyond this election.”

Fighting for Our Future

The Convention was about the future of the labor movement and how to build a stronger Teamsters Union. TDU mobilizes to win new leadership at the top, but we also work to develop new rank-and-file leaders, activists, and organizers who build union power in our workplaces and our locals.

To accomplish our goals, we need to build a stronger TDU movement in the coming year. A Resolution “Our Goals for 2022 and Beyond” was adopted to chart our course.

The Convention was jam-packed with some 22 educational workshops and meetings, exciting plenaries, and networking by industry, caucuses, and informal sharing.  We took time to celebrate victories won after years of organizing, including abolishing the “2/3 rule” to reject contracts, and winning rank and file members on all bargaining committees.

Rand Wilson, a union organizer and strategist who was the communications coordinator for the 1997 UPS strike victory, noted that “The TDU Convention is unique in the labor movement—where else are rank and file activists, local leaders, and International officers meeting as equals to strategize together.”

The Convention elected a Steering Committee to help guide the organization through 2022. That Committee includes leaders at all levels of the union as well as fresh new leaders for the future.

An article on the Convention noted it was “bigger, more diverse and younger than recent TDU Conventions,” and the Steering Committee reflects it.

Three new members of the Steering Committee elected are Carthy Boston, a steward in Washington DC Local 639 who is a star campaigner and educator; Greg Kerwood, a steward and IBT Convention delegate, from Boston Local 25, who described the IBT election is “a pivotal moment in Teamster history” in a recent Labor Notes article; and Paul Trujillo, of Norfolk Local 822, an experienced steward, former Business Agent and communications specialist.

TDU relies on membership dues and donations to keep our movement going.

The members present donated $92,845 to TDU as well as to the Teamster Rank and File Education and Legal Defense Fund (TRF), and to a scholarship fund to bring more low-income Teamsters to future conferences.

A GoFundMe appeal and other donations following the Convention have raised over $20,000 so far.

Ken Paff, one of TDU’s founders and a strategist of Teamster reform, stepped down as the TDU National Organizer.  Going forward, David Levin, TDU’s lead organizer with more than 25 years in the movement, will be the Staff Director. Paff was elected to the TDU Steering Committee and will continue to be a part of our national leadership.

You can Join TDU to be part of the change that you want to see in our union.