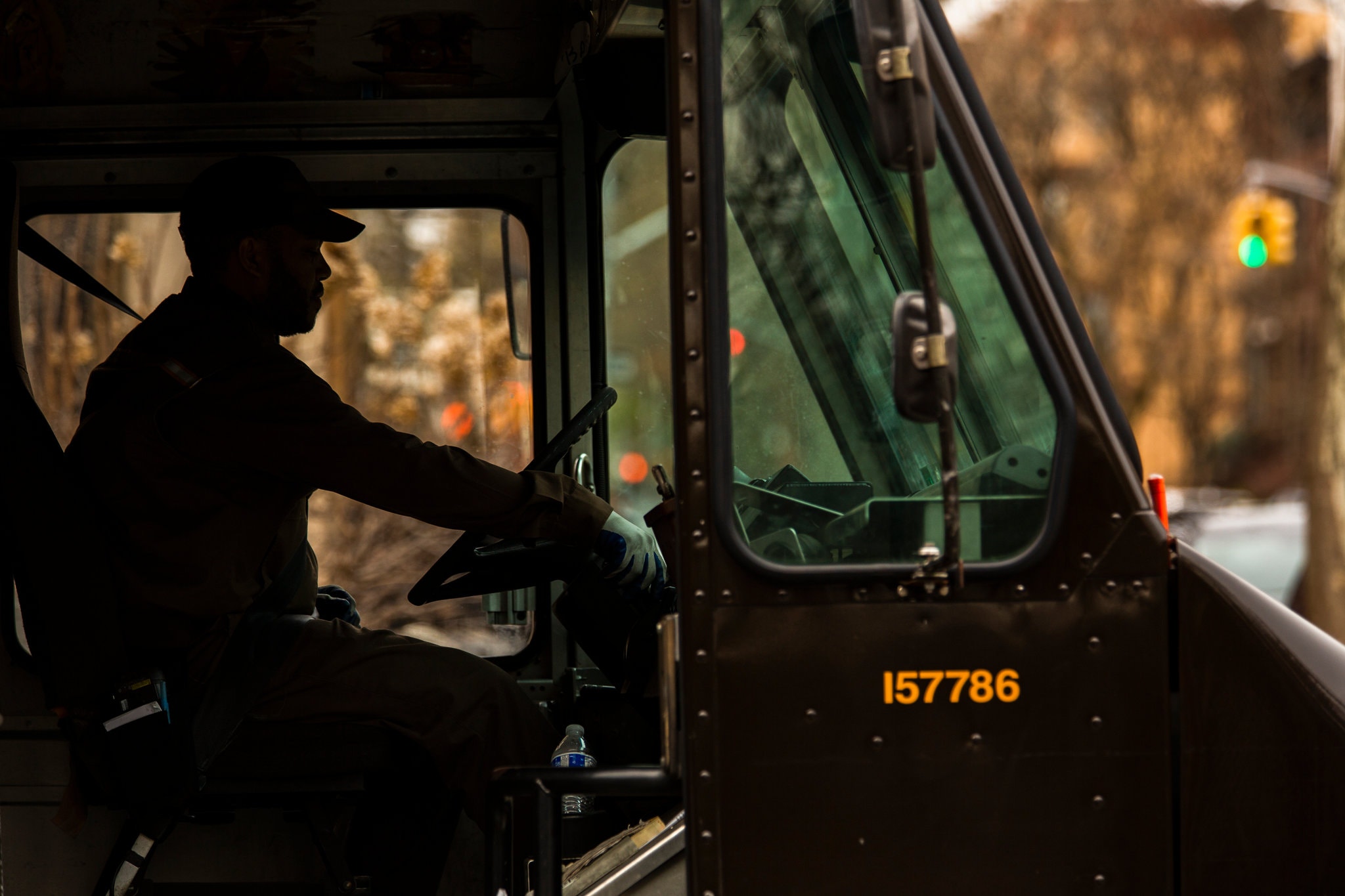 Hour after hour, day after day, the packages keep arriving: food, medicine, clothes, toys and a million other items brought to the doorsteps and building lobbies of Americans who are hunkering down as the coronavirus sweeps the land.

An increasing number of the workers sorting those boxes, loading them into trucks and then transporting and delivering them around the country have fallen sick.

They have coughs, sore throats, aches and fevers — symptoms consistent with the coronavirus. Yet they are still reporting for their shifts in crowded shipping facilities and warehouses and truck depots, fearful of what will happen if they don’t.

“I have been coming in sick because I’m worried that I’ll lose my job or just be punished if I call out,” said Angel Duarte, a package handler at a UPS hub in Tucson, Ariz. “I am 23, and I have no savings, and I have a 4-month-old son.”

UPS, FedEx and XPO Logistics are three of the largest shipping and logistics companies in an industry that collectively delivers about 18 trillion dollars’ worth of goods every year. With millions of Americans now on lockdown, home-delivery orders have soared, and the companies have become among the few power sources keeping the lights on in the darkening United States economy. UPS, for example, is one of the main companies that deliver packages for Amazon.

Public health experts said the odds were relatively low that ill warehouse workers or truck drivers would infect the recipients of packages, in part because the virus does not survive on cardboard surfaces for very long. 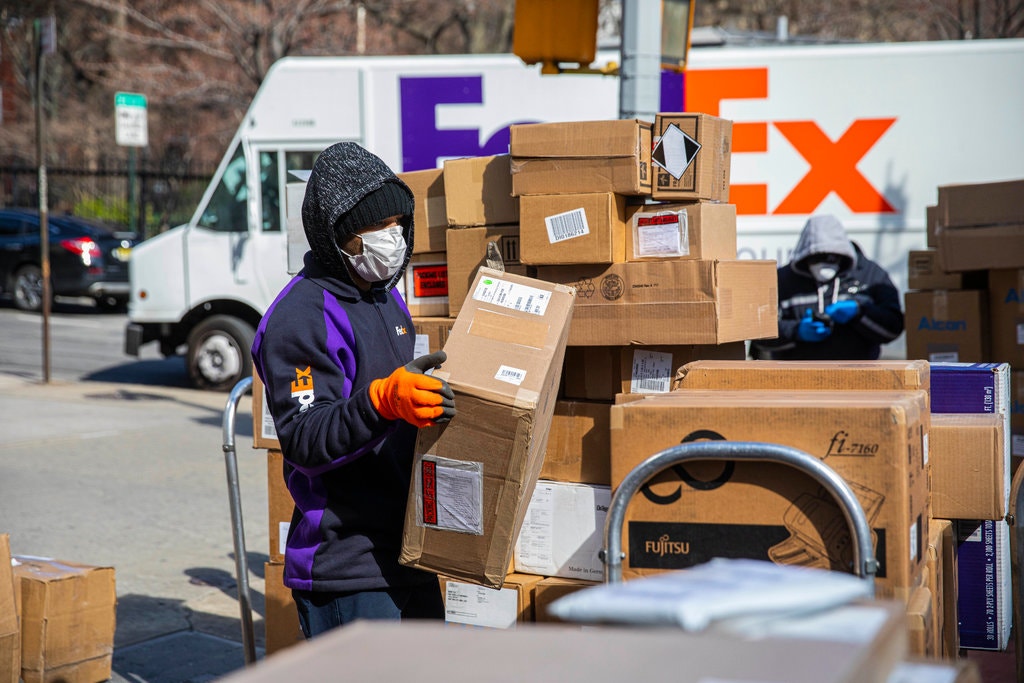 UPS, FedEx and XPO Logistics are three of the largest companies in an industry that collectively delivers about $18 trillion worth of goods every year.Credit...Hiroko Masuike/The New York Times

But as state governments race to contain the fast-spreading pandemic by shutting down businesses and banning gatherings of more than a handful of people, more than 30 employees of UPS, FedEx and XPO said in interviews and emails that they were worried that their warehouses and trucks had become breeding grounds for the virus.

Some warehouse workers said supervisors had rebuffed them when they pleaded for bleach, masks, gloves and a ready supply of hand sanitizer. In some facilities, even hand soap and paper towels are scarce, employees said. Employees continue to be jammed shoulder to shoulder along conveyor belts and required to maintain rituals such as security pat-downs.

Many workers in the logistics and delivery industry get at most a handful of paid sick days a year. That can push them to work through coughs and fevers. Now, with so many people and businesses relying on a functioning delivery system, the pressure to go in has only intensified, workers said.

A package sorter in a UPS facility near San Francisco said she had been going into work every day, even though her “throat feels like broken glass.” The worker, who requested anonymity, said she was petrified that she would lose her job if she called in sick. “I can’t afford to be homeless,” she said.

Another UPS package handler, Jeff Donigian, who works in Manchester, N.H., said he had been showing up to work feeling ill and coughing. He told a supervisor; he was told to go in anyway.

A UPS driver with a compromised immune system said she had been hauling packages around Northern California despite feeling sick for a week. With an avalanche of orders, her supervisor told her that UPS could not afford to lose her, even for a couple of days.

“While it is possible to find an exception, our work force has been provided information and supplies to manage health risks,” said Steve Gaut, a UPS spokesman.

He said that the company had “substantially increased cleaning and disinfecting surfaces throughout our facilities,” and that the vehicles and equipment were disinfected every day. Masks are being made available to drivers who made deliveries to health care and assisted-living facilities, and the company is “distributing an additional 250,000 bottles of hand sanitizer.”

Mr. Gaut declined to comment on the experiences of the drivers or workers handling packages, but emphasized that UPS did not want sick employees to go into work, adding that the company provides paid time off for those who are infected.

At XPO, which handles shipping for companies like Disney, Nike and Verizon and has a large fleet of trucks that haul goods nationwide, warehouse workers and truck drivers do not get any paid sick days. The company, which has faced intense criticism from employees about dangerous work conditions in its warehouses, offers to “lend” workers up to 100 hours of time off, but employees have to repay that time.

An XPO warehouse worker and a driver said in interviews that as a result of the company’s policy on sick leave, they had been go into work with coughs and worse. 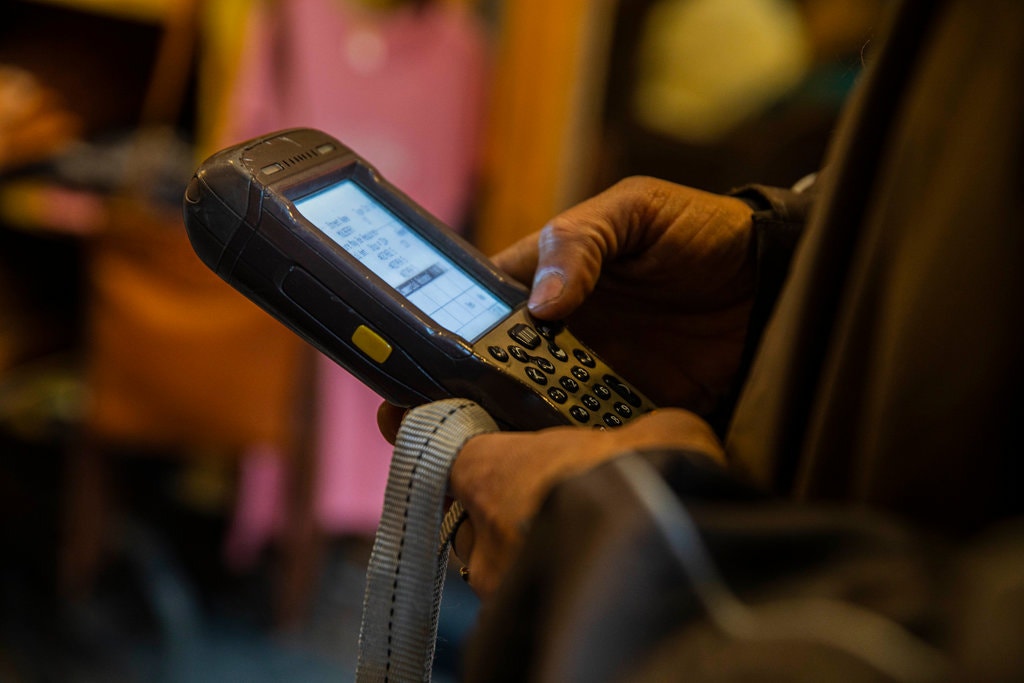 “The company is shifting the financial burden on the people who can least afford it,” said Mike Zangrillo, a 67-year-old driver for XPO in Miami. If he gets the coronavirus, he said, he plans to keep driving his eighteen-wheeler.

Bob Josephson, an XPO spokesman, said the company had started offering paid time off for workers to be tested for the coronavirus and, if necessary, quarantined. “As the situation evolves, we’re listening to our employees’ concerns and adjusting our policies in real time,” he said.

Dan Baker, a part-time package handler for FedEx in Nashville, worked through a sore throat and stomach problems this month. When he developed a fever, he told his supervisor he needed a day off.

“I really need you here today,” Mr. Baker’s supervisor told him in a text message reviewed by The New York Times. He took the day off anyway. The company marked his absence as unexcused, meaning he got a demerit. Too many demerits can get a worker fired.

“I went to human resources to ask about it, like, ‘Why was I given an unexcused absence, why’d I get in trouble for this, when there’s a pandemic going on?’” Mr. Baker said. “And they were like, ‘I don’t know what to tell you.’”

Mr. Baker described a macho culture at his warehouse, where people have not been taking the virus seriously. One colleague who wore a mask was teased so relentlessly that he took it off. Mr. Baker overheard another colleague telling a security guard that his mother had tested positive but that he had to gone to work anyway.

“It’s not going to do these people who are ordering and hoarding this stuff any good if everyone handling the packages are sick,” he said.

Jenny Robertson, a FedEx spokeswoman, said the company had been urging employees “to take any signs of illness seriously and seek medical attention as needed.” She said that the company had been frequently disinfecting facilities and vehicles and that it had recently increased paid sick leave available to some employees.

Ms. Robertson arranged for The Times to speak with a driver in Garden City, N.Y., who said FedEx had provided him with gloves, hand sanitizer and Clorox wipes for his truck. The driver, Raymond Wenz, said he had nine days of personal and sick days to use if he fell ill. He said he was confident that, if needed, he could use his three weeks of vacation, which must normally be scheduled in advance.

“I’m pretty sure that if I’m in a bind, they would work with you,” Mr. Wenz said.

Truck drivers for UPS, FedEx and XPO said they were grateful for a recent change: Customers no longer need to sign for deliveries. That means no shared pens and no need to get within six feet of customers.

The drivers described operating in what felt like a world hollowed out by sickness. On Facebook, they swap photos wearing gas masks. Regular customers will not let the drivers use bathrooms. It can be hard for them to find places to wash their hands along the routes, especially as more and more businesses close. 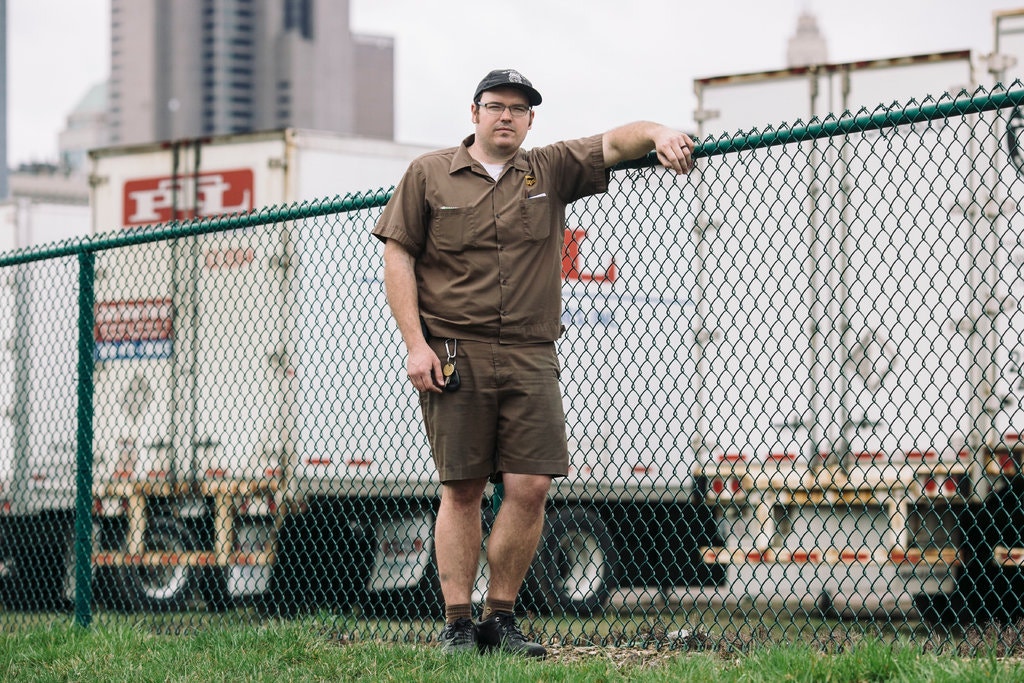 “I didn’t think I’d be on the front line of the pandemic,” said Nick Perry, a UPS driver in Columbus, Ohio.Credit...Andrew Spear for The New York Times

Nick Perry, a 32-year-old UPS driver in Columbus, Ohio, said his supervisors had told him that he could not have Lysol wipes or hand sanitizer in his truck without paperwork listing the ingredients, as required by the Occupational Safety and Health Administration. Mr. Perry said he feared for his twin boys, who have a history of serious respiratory problems.

“I didn’t think I’d be on the front line of the pandemic,” he said. “But here I am, and I am terrified for the public’s health, and for my parents and for my family.”

On Wednesday, Gov. Mike DeWine of Ohio urged businesses to take the temperatures of all employees before they entered workplaces and to be “aggressive in regard to cleaning surfaces and having soap/hand sanitizer available.”

Mr. Perry said a manager had told him that the governor’s directive was not a “mandate” and that UPS’s Columbus trucking facility did not have the necessary resources to comply.

Some UPS workers created a petition to push the company to better sanitize common areas and give employees 14 days of paid time off if they needed to be in quarantine after exposure to the coronavirus. In about 24 hours, more than 10,000 workers signed the petition, according to David Levin, an organizer with Teamsters for a Democratic Union, which helped coordinate the petition. 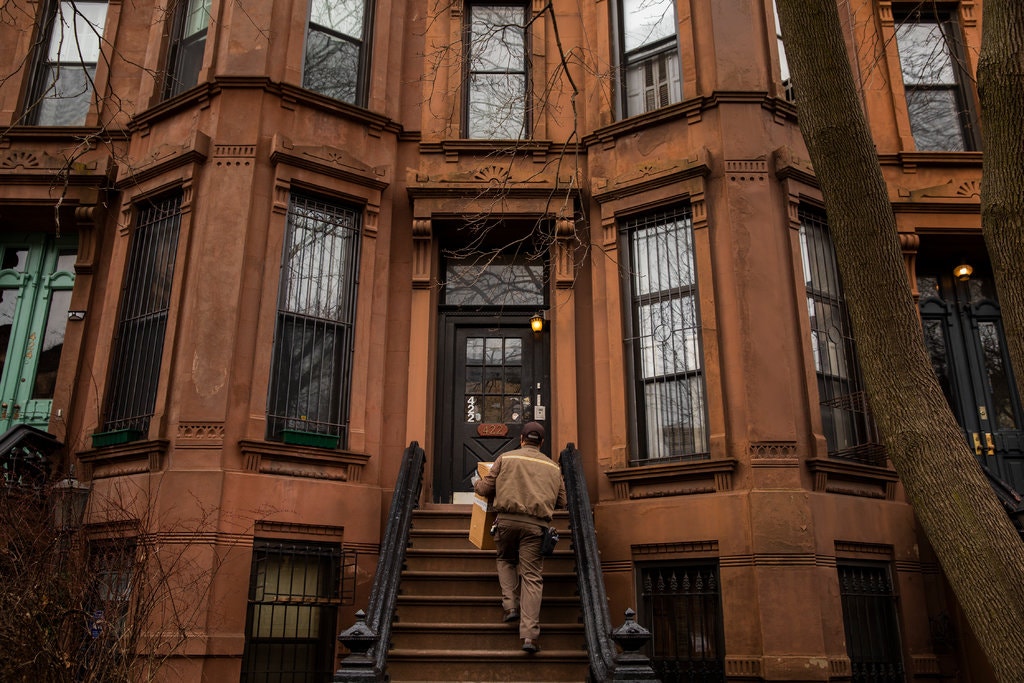 UPS workers created a petition to push the company to better sanitize common areas and give employees paid time off if they had been exposed to the coronavirus. Credit...Benjamin Norman for The New York Times

On Wednesday, UPS agreed to give people 10 paid days to stay home if they or their members of their immediate family received a coronavirus diagnosis or if they needed to quarantine themselves.

But Fen Davidson, who identifies as nonbinary and works at the same UPS hub in Tucson as Mr. Duarte, said there was still pressure to come in.

This week, Mx. Davidson said, a supervisor told them that taking too many sick days could cost them their job. “They don’t want people faking sick, I guess, but what they are doing is creating a climate of fear,” said Mx. Davidson, 33.

One of the workers nearby on the conveyor belt line has been complaining of body aches.

“He has been coughing all week,” Mx. Davidson said. “But he can’t afford to lose this job.”

Reprinted from the New York Times