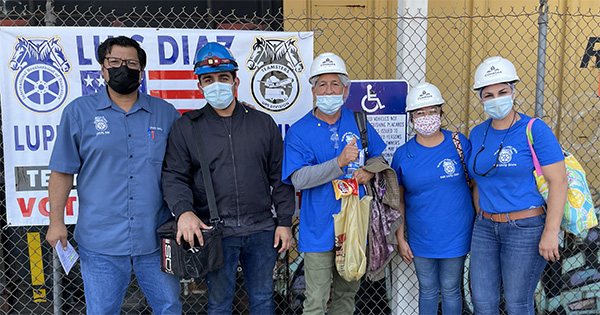 Luis Diaz (left) with supporters at the Con Agra plant in Oakville, Calif.

But the real loser was disgraced International vice president Rome Aloise. And the big winners were the 6000 members and their right to run their own local.

This was a rerun election, ordered by Joint Council 7, which is headed by Aloise. The rerun was ordered after Aloise’s favored candidate, then-incumbent Adam Ochoa, was narrowly defeated in the regular union election of a year ago. The Hoffa administration then ratified Aloise’s dirty deal.

Luis Diaz noted that “I’ve always had faith in the members. This is the seventh time they have elected me to a union position. I just hope no other local has to go through this kind of treatment.” Diaz has endorsed the O’Brien Zuckerman Teamsters United slate.

Aloise pulled out all the stops to get his guy back in office. Reportedly he raised significant money for Ochoa’s campaign. International candidates who are Aloise’s loyal allies, Vairma-slate candidates Jason Rabinowitz and Peter Nuñez, personally campaigned at the Visalia UPS hub for Ochoa. Agents from Local 853 (headed by Aloise) and Local 2010 (headed by Rabinowitz) served as observers at the vote count.

Odus Hall, Senior BA at Local 948, stated that “I’ve been in some sort of leadership position in Northern California Teamster locals since the early 1990’s, and never seen this level of outside interference in a local union’s election.”

But when the votes were counted, it was a clear victory for the Luis Diaz team. And a victory for Teamster democracy.