“We are out here today because everybody knows that our democracy has been stolen,” said Jed Dodd, Chairman of the BMWED [Penn Federation], before being arrested on Monday. “A democracy with endless gifts for legislators and severely gerrymandered districts, where the people’s voice isn’t heard, is not a democracy. We are tired of this. We are prepared to take our country back.” 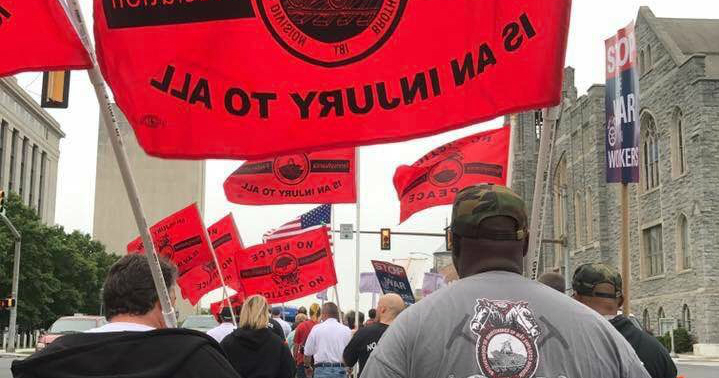 Teamster BMWE officers and members along with our unionists and concerned citizens demonstrated at the state capitol in Harrisburg, Pa, on May 22 to support House Bill 39, which would ban gifts to lawmakers.

Chanting “Pass the gifts ban, do your job” and “Drain the swamp,” a boisterous crew of March on Harrisburg participants and members of the Teamsters Union jammed the hallways outside the office of Pennsylvania House State Government Committee Chairman Daryl Metcalfe on Monday to demand action on a bill banning gifts to lawmakers. Many of the same protesters later disrupted proceedings outside a committee room buried deep in the Pennsylvania State Capitol. According to police, both actions resulted in 23 arrests for disorderly conduct.