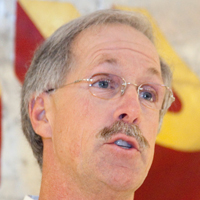 Rita has worked tirelessly in the past two years, and has spoken at rallies, press conferences, and testified at the U.S. Senate in 2016.

Butch was a Vietnam veteran, who survived a war injury that ended his baseball career. He wasn’t one to complain, however. He became a dedicated Teamster, a long time TDU member, and a caring person who never tooted his own horn.

He believed in honest work and justice and put his beliefs into practice. He was a freight driver and steward for Holland Motor and was well-respected by his co-workers. He became a business agent, and later served a term as the President of Cincinnati Local 100.

Butch stood up for solidarity and democracy. He served on the TDU Steering Committee and ran for International Vice President on the 2006 Tom Leedham slate, working to bring integrity and solidarity to the Teamster leadership.

It is a fitting tribute to Butch Lewis that the pension protection bill be named in his honor.