Come to the Teamster Convention

Any Teamster or retiree can attend the Teamster Convention to be the eyes and ears of the rank and file and to stand with Fred Zuckerman and the Teamsters United Slate. 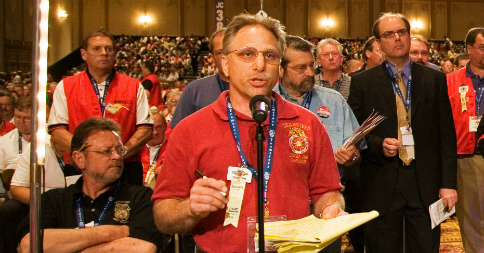 The Teamster Convention will be held June 27 - July 1 in the Paris Las Vegas Hotel Convention Center in Las Vegas.

Convention Delegates will vote on changes to the Teamster Constitution—and they will vote to nominate candidates for International Union office.

The Hoffa Campaign is putting on a full court press to try to prevent Fred Zuckerman and Teamsters United candidates from getting on the ballot. Teamsters United is fighting right back and working Teamsters have their back.

Any Teamster can attend the Convention and be part of the action. But you must register in advance.

If you need to use union leave to get unpaid leave of absence time from your employer, you can request that through your local union. Contact Teamsters United regarding this issue and any other questions you may have.

Contact the Teamsters United campaign to let Fred know you’ll be at the Convention—or to get answers to your questions.

Click here to register for the Teamster Convention. This will get you credentials to attend as a guest.

This article originally appeared on the Teamsters United website.