Corporate Greed and CEO Pay on the Rise

The same CEOs who are demanding concessions from Teamsters are giving themselves big raises. 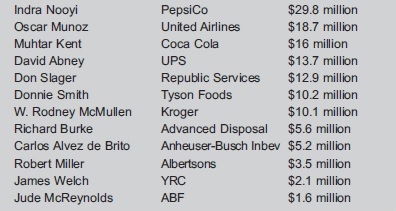 American CEOs got an 8.5-percent raise last year in compensation, according to a study by the Economic Policy Institute.

That’s nearly double the 10.9-percent rise the average full-time employee has seen over the same period.

Many of the CEOs who are demanding concessions from Teamsters are giving themselves big pay increases.

Coca-Cola CEO Muhtar Kent, who stepped down in May, paid himself compensation of $16 million last year—a $1.4 million raise from the year before.

Coke Teamsters across the country have been battling healthcare hikes and the elimination of Teamster jobs.

UPS CEO David Abney made $13.7 million in 2016, a 20% increase from the year before. Abney has more than tripled his pay during the contract that imposed healthcare cuts on 100,000 UPS Teamsters.

Teamsters at YRC took massive wage and pension concessions while CEO James Welch’s pay ballooned to $5.22 million in 2015. Welch took a pay cut last year, but still hauled in over $2.1 million, after taking a cut due to failing to make corporate targets.

Munoz’s $18.7 million payday was not bad. But it’s nothing compared to the $37 million in compensation paid to former CEO Jeff Smisek who stepped down in the face of a federal corruption investigation.

CEOs at the largest U.S. firms now make 271 times more than the average worker, according to calculations by the Economic Policy Institute for 2016 salary numbers.

Employers and CEOs are taking care of themselves. With profits and CEO pay on the rise, our union needs to fight so that Teamster members get our fair share.