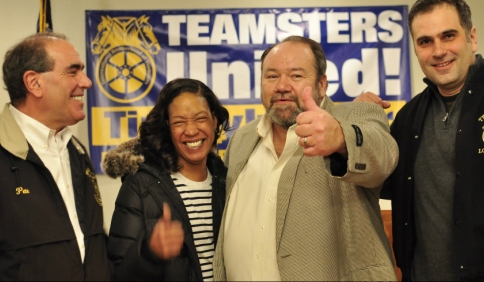 The Office of the Election Supervisor used statistical sampling to validate 53,896 signatures of the more than 63,000 signatures turned in by the campaign.

This was more than enough to accredit the Teamsters United candidates in every region.

A protest has been filed by the Secretary-Treasurer of Teamsters Local 237 asserting that Vice Presidential candidate Jakwan Rivers is not eligible to run for International Union office because of untimely payment of dues.

The Election Supervisor will rule on this eligibility issue separately from the accreditation process.

The protest claims that the Election Supervisor should invalidate every member signature and not accredit the Teamsters United Slate. This claim has no basis in the rules, but does show just how desperate the Hoffa-Hall Slate is to avoid a democratic election.

Click here to read the notice from the Election Supervisor accrediting the Teamsters United Slate.