What do you do when the YRC national contract wages are so low that you cannot find qualified workers? You raise the starting dock wage, but only at a select group of terminals! That’s the deal signed by Hoffa’s new Freight Director, Ernie Soehl. 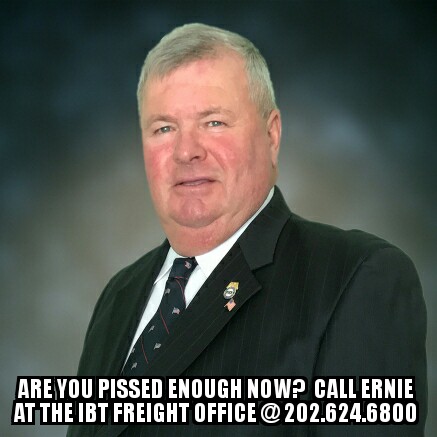 The Memorandum of Understanding boosts the pitiful non-CDL dock rate to $16, after an 18-month progression, but only at a specified list of terminals.

For the first time ever, freight Teamsters at the same company will make different wages at different terminals.

The list includes terminals in some higher-wage metro areas such as New York, Washington and Seattle. And it includes some other terminals. But most terminals are left out completely.

As for any raise at all for the existing Teamsters who are keeping YRC rolling? That is not even mentioned in the MOU.

This big break with Teamster solidarity has Teamsters hopping mad. Some have made up a “Call Ernie” poster, to demand that the Freight Director renegotiate this divisive disaster.

YRC has a duty to bargain with the IBT before implementing such differential raises. So how about some actual bargaining, instead of just saying Yes Sir to management’s plan?

It may be time to use some real Teamster solidarity, such as area standards picketing to eliminate subcontracting, and put more Teamsters to work.

Our last freight director, Tyson Johnson, was just soundly defeated in the IBT election for Southern Region vice president after years of selling-out members. Brother Soehl: how about listening to the members?