Teamsters and retirees across the union are battling to save our earned pension credits. If Hoffa's on our side, here's how he can show it. 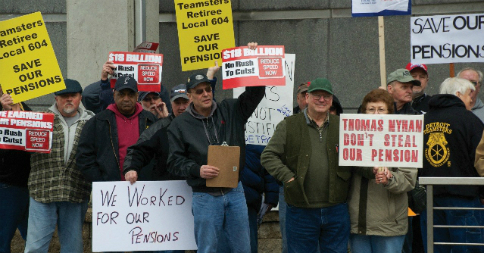 On June 18, 150 retirees converged on Washington to support the introduction of the Keep Our Pension Promises Act.

Hoffa served on the board of the NCCMP in 2014, which drafted and lobbied for the pension cut legislation. But he sent International VP John Murphy to the Capitol on June 18 to support its repeal.

If Hoffa is serious about protecting our pensions, he needs to show it with action, not just words.

So far, we have not seen these minimal, low-cost steps taken. We call upon the Hoffa administration to take action now. And then go on to help mobilize for a mass mobilization in Washington D.C.

Teamsters and retirees are working together with allies to save our pensions. We expect our International union to be on our side – with actions, as well as press releases.

Find out what’s in the Promises Act

You can stay informed on the pension movement and you can help make it happen by Joining TDU.