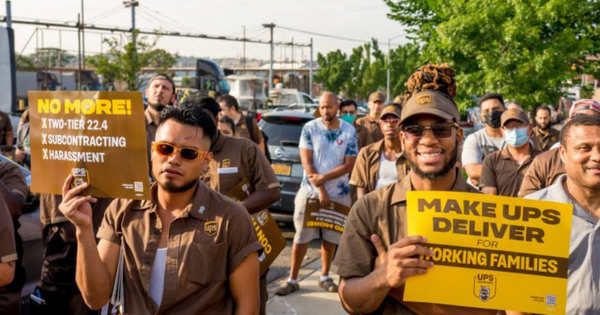 UPS has more International Brotherhood of Teamsters members on the payroll than any other employer, with the union representing roughly 350,000 drivers and other workers at the company. The current collective bargaining agreement, which expires July 31, 2023, was a flashpoint in last year's election for new leadership at the Teamsters given that many rank-and-file members have vocally opposed the two-tiered wage system and other provisions included in that deal, which was negotiated in 2018.

The union's announcement of the contract campaign on Aug. 1 was forceful and full of references to strikes, including the fact that it was announced on the 25th anniversary of a landmark 1997 work stoppage at UPS. Teamsters General President Sean O'Brien said in a statement announcing the launch of the contract campaign that the union would either have a new agreement by the time the current deal expires or that members would strike.

A Teamsters spokesperson said the union views a strike as a tool to be used as a "last resort," but that it is an option if the UPS contract talks drag beyond the end of the current agreement.

"If this billion-dollar corporation fails to respect its workforce and cannot agree to a new contract by July 31, 2023, the Teamsters will hit the pavement — and not a day later," the spokesperson said in a statement to Law360.

Experts told Law360 that a strike in 2023 is a real possibility given the widespread disapproval of the current agreement, but that the union is also simply putting pressure on UPS to come to the table by launching the campaign and raising the possibility of a strike so early.

"It isn't just huffing and puffing about a strike, it's what it is they would like to accomplish so as not to have to strike," said Jon Hiatt, former general counsel at the AFL-CIO and current senior adviser to the International Lawyers Assisting Workers Network.

Teamsters members have criticized the 2018 contract since it was adopted and the approval of the deal was itself mired in controversy. Union leadership at the time adopted the contract despite a majority of voting membership having cast their ballots against its ratification. A since-excised provision in the Teamsters constitution allowed for the approval of deals that did not get a supermajority of votes if less than 50% of eligible members voted.

The primary target of criticism in the contract is its treatment of a group of drivers who work weekends and are paid less than other drivers, known as 22.4s after the provision of the contract that set up the class. Objections to similar two-tiered wage systems were common during the string of strikes and other labor actions that cropped up last fall, including strikes at Kellogg and John Deere.

Michael Duff, a labor law professor at Saint Louis University and a former Teamsters member, said the two-tiered system is a particular problem because of its effect on union solidarity, calling it "antithetical to what the Teamsters are all about."

"I do think if we're talking about solidarity over the course of representing Teamsters at UPS, I don't know if I can overemphasize how important an issue that can be," Duff said.

In a statement announcing the contract campaign, Teamsters General Secretary-Treasurer Fred Zuckerman mentioned eliminating the 22.4 classification as a goal of the contract, as well as getting rid of "subcontracting, driver-facing cameras and harassment." Zuckerman also mentioned seeking better pay for part-time workers and adding full-time positions at the company.

In a statement to Law360, UPS touted its history of negotiating with the Teamsters and said it is confident it will reach a deal acceptable to both sides.

"We believe we'll continue to find common ground with the Teamsters and reach an agreement that's good for everyone involved," the company said. Kati Sipp, a union organizer and principal at union-side consultancy New Working Majority, said given the size and importance of the UPS contract, it is not surprising that the Teamsters have kicked off their contract campaign a year in advance.

As part of the campaign, the union launched a new mobile app for UPS Teamsters that includes bargaining updates, an anticipated timeline for talks and alerts for contract-related events. The app also includes a "strike savings calculator" that helps members experiment with how much they can save by the day the current agreement expires.

Sipp said the app is a good way for the union to use technology to communicate with a membership that is spread across a wide area, especially when paired with extensive on-the-ground organizing the union will lean on over the next year.

The app could also be a helpful tool for the union to communicate its messages about the contract to workers, cutting down on the advantage UPS might have in messaging about the agreement, said Daniel Sobol, a shareholder at Stevens & Lee who represents employers.

The Teamsters spokesperson said O'Brien is seeking "the highest level of member participation" in the UPS talks and credited member involvement for the success of bargaining over a contract for drivers who transport cars.

As for the strike threat, experts said there are reasons to take the union's stance seriously, even if there is a lot of time left for a different outcome.

O'Brien promised to take the Teamsters in a more militant direction during his successful campaign in last year's union election, including saying his leadership team would "take on UPS" during bargaining.

Sipp said it is common for large unions to take militant positions on their largest contracts and that the strike messaging from the Teamsters so far probably also has the effect of signaling to members that leadership is taking the negotiations seriously. The union also would not so
publicly tie itself to strike messaging if it did not believe it had the organizing capacity to launch an action if the time comes, Sipp said.

"They aren't going to threaten a strike if they don't feel like they can pull one off a year out," Sipp said. "That might be a thing that you do in a very hasty way at the end. It says to me that they are very serious about spending the resources that they need to walk their members through this process and get a strike vote if they are not succeeding at the table."

The strike comments are also a signal to UPS that the union is prepared for a drag-out campaign, Sobol said. While a union threatening a strike can make contract negotiations more adversarial, Sobol said, the Teamsters' stance could also spur UPS to come to the table with more advanced offers earlier in negotiations.

"UPS is going to try to get the best contract they can, but it might change the cadence of negotiations," Sobol said.

The Teamsters also have sizable leverage going into the talks, Sobol said, because current driver shortages mean UPS will have a hard time replacing workers.

The union has not been shy about referencing the 1997 UPS strike in its contract communications so far, and Hiatt said members are well aware of the history whether or not they were working for the company at the time. The 1997 strike saw 185,000 workers walk off the job for more than two weeks, resulting in a contract that included 10,000 new full-time positions.

Nelson Lichtenstein, a labor historian at the University of California Santa Barbara said there are some parallels between the coming negotiations and the 1997 strike, including a presidential administration that is publicly sympathetic to organized labor and reform leadership at the Teamsters.

"The potential of re-creating that moment is very much there," Lichtenstein said.

The 1997 strike was at the time seen as a potential spark for a resurgent labor movement, said Robert Bruno, director of the Labor Education Program at the University of Illinois School of Labor and Employment Relations. While many of those hopes were not fulfilled in the years after the strike, Bruno said a successful Teamsters campaign at UPS could have far-reaching effects whether or not members actually walk off the job.

"I don't think it requires a strike for it to be pivotal, but if a good contract is achieved as a result of some large national strike, it will just further raise the profile and the public representation of what this union is capable of doing," Bruno said.