Craig Davis, a former forklift operator at a Hostess cake plant in Emporia, Kan., has been unemployed since November, when the Twinkies maker shut its factories and began liquidation proceedings.

He could have applied to get his old job back now that the plant is churning out Twinkies, Zingers and Ding Dongs in preparation for a July 15 return to store shelves. But he said the current starting salary of about $11 an hour, with the chance to bump it to $14, is "a slap in the face."

Eight months after Hostess closed amid labor strife, its former workers have had divergent paths, but many of them have failed to regain their previous income levels. Hostess moved to liquidate in November shortly after the Bakery, Confectionery, Tobacco and Grain Millers International Union went on strike in response to a new contract imposed on them at a bankruptcy court's direction. The bakers balked at the company's cessation of pension contributions. Hostess later admitted to using wages that were supposed to help fund pensions for the company's operations.

C. Dean Metropoulos, chief executive and co-owner of the new Hostess, where the workforce currently isn't unionized, said the company has "put together an excellent and competitive wage and benefits program for our employees."

Some former Hostess workers who belonged to the International Brotherhood of Teamsters still blame the baker's union for the company's demise.

"We might still have our jobs if they didn't go on strike in November," says Scott Quenneville, a former Hostess delivery driver and Teamster in Detroit.

Luigi Peruzzi, another former Hostess driver in Detroit, is now delivering Frito-Lay chips as a salaried employee filling in when other drivers are on vacation. The 49-year-old expects he might get his own route in a year, enabling him to earn commissions.

Mr. Peruzzi said he feels fortunate to have a job, but "Trying to stretch that money across all my bills is pretty tough." The Hostess episode, he said, "is like a distant bad memory now." 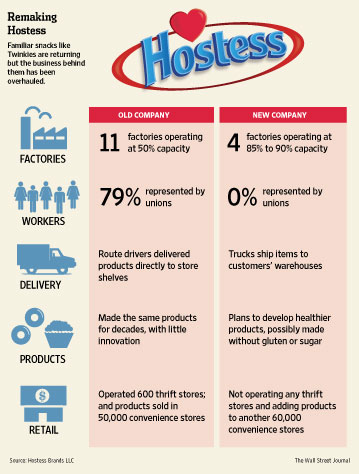 Some former Hostess employees are better off. James Jones, who had worked at a Lenexa, Kan., bakery for almost 26 years, found a new job as a machine operator at a nearby Unilever ULVR.LN +0.72% PLC plant. Mr. Jones, 52, said he earns almost $2 an hour more than his $16.32 hourly wage at Hostess, and has better benefits.

As a bakers union member who had voted to strike, he said, "I have no regrets."

Mr. Davis, the former forklift operator, said he's hoping for a job at a power plant after he finishes his associate's degree in power-plant technology next year from a vocational school he's attending through a government retraining program.

His house is paid for and his two kids are grown, so he and his wife can get by on her salary as a registered nurse for a while. Mr. Davis, 45, considers himself lucky, but worries about retirement. Had Hostess continued contributing to its employee pension plan, Mr. Davis says he would have been eligible to collect about $1,800 a month starting at age 55. Now expects to draw only $500 a month.