Last week on April 24th, hundreds of Walmart workers in 200 stores stood up to demand that Walmart honor its public commitment to be more consistent, transparent, and fair in scheduling shifts and hours for workers. They were joined by over 10,000 people taking action online.

On the same day, Walmart posted an explanation of why workers have yet to see changes in their stores despite the fact that Walmart made a public commitment to addressing these scheduling issues four months earlier. In the post, Walmart claims that it had initiated a pilot program in two cities and lays out a timeline for expanding the program, stating:

"Walmart is piloting the program in Denver and Fort Smith, Ark., to provide associates with transparent and consistent information on available shifts throughout the store and give them the opportunity to request to work any of those shifts. Associates now have more transparency into available shifts outside of their department...The pilot program, which began Feb. 1, is scheduled to expand to more stores in July and roll out to the company's more than 4,000 stores by the end of October."

Since the Organization United for Respect at Walmart (OUR Walmart) started organizing over a year ago, hours and scheduling issues have been a central issue for workers speaking out for change. Inconsistent hours and erratic schedules often make it difficult for workers to budget and nearly impossible for them to take on a second job or go back to school.

This victory is a major success for Walmart workers and those of us who are standing with them, but we must remain vigilant to ensure that Walmart makes good on its public commitments.

Here are a couple of awesome pictures from last week's events: 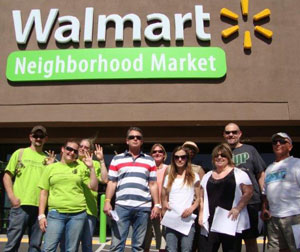 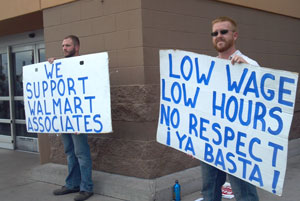 Community supporters at a Phoenix action.