Star Tribune Guild workers rally outside of the newspaper's headquarters

Late Tuesday afternoon, about 135 people gathered outside the entrance of the Star Tribune's downtown headquarters.

They carried posters proclaiming "Show Us the Green in 2013" and "Re$tore Our Pay"; they wore green ribbons next to stickers emblazoned with a sneezing green face, marked "PTO makes us sick: Give us back our sick days." The most common sign said only "2,000," with each zero doing double-duty as a sad emoticon -- a reference to the number of days the 250 members of the Star Tribune Newspaper Guild have gone without a raise. 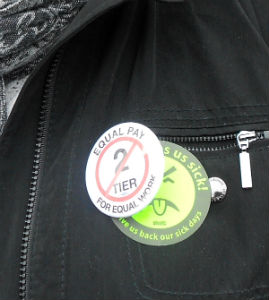 The Guild members' contracts expired at the end of January, and since then, negotiators have gone back and forth with company management 14 times, trying to work out a new agreement. "So far, there's been nothing we would accept," said Jackie Crosby, a Star Tribune reporter and the Guild vice chair.

When the company was in bankruptcy, in 2009, Guild members took pay cuts of 8 to 15 percent, among other concessions to keep the Strib above water. Now that the company is back on firmer financial footing, the Guild is seeking raises for its members for the first time in nearly six years, as well as a more competitive 401(k) plan, restored bereavement leave and sick days, and a scaling back of the "two tier" system, under which certain workers -- such as suburban and niche product reporters -- receive a smaller salary and fewer benefits than their newsroom peers.

As Tuesday's rally started, the reporters among the crowd joked about being on the other side of the news. "We only know how to receive press events, not do them," laughed Crosby, as she stepped up to the megaphone to introduce Janet Moore, a reporter and the Guild co-chair, as the first speaker. 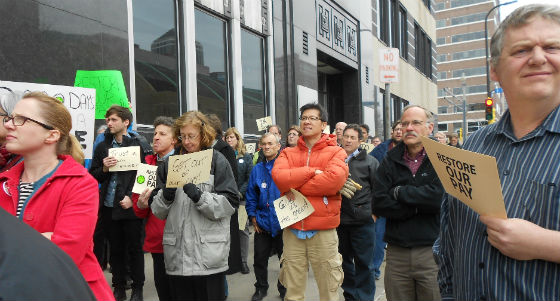 "We have lifted each other up even though management clearly believes that great journalism can be done on the cheap," Moore told the crowd. "The company likes to compare us to others in our troubled industry. Well, we're not like the others, and thankfully so. We are survivors and we now work for a financially stable business."

After Moore, speakers from the Teamsters 120 union, Minnesota AFL-CIO, AFSCME, and SEIU Local 26 addressed the workers. So did one of the part-time reporters in the bottom tier of the two-tier system, who explained that sometimes, knowing she makes "less than two-thirds" the amount her colleagues do is "particularly difficult to stomach [when] our bylines appear side-by-side."

After about 15 minutes, the rally wrapped up and the crowd trickled back into the building. Guild negotiators return to the table for a 15th round on Thursday, and those involved hope that the rally will show management the extent of the support for the Guild among workers.

"We want the company to know that we back the negotiators," explained Crosby. "These aren't just people who are on the fringes of the newsroom. They really are representing our will." 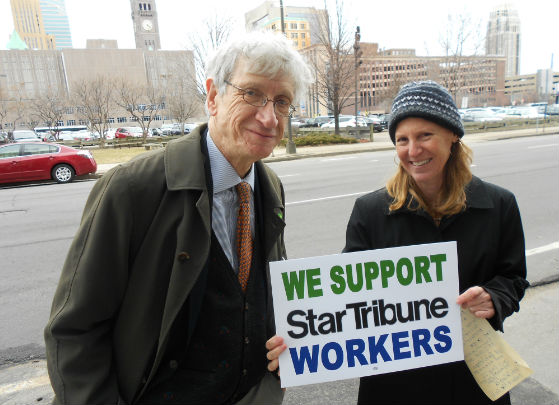