Union-Employer Proposal Would Hit Some Retirees

A coalition of unions and employers is proposing changes to the federal law that governs the pension plans of about 10 million people, including reducing benefits paid to retirees, the first time in four decades that such cuts would be allowed.

The proposal, which would undo guarantees put in place by federal law in 1974, is already stirring controversy among pension-rights advocates and rank-and-file union members. It was developed by some of the nation's biggest unions, including the Teamsters and United Food and Commercial Workers, and industry trade groups such as the Associated General Contractors of America. 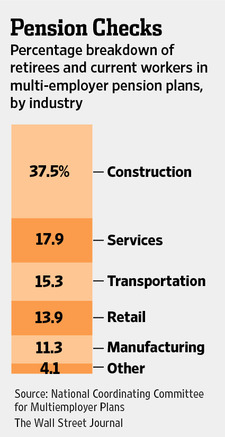 Pension experts say a report issued by the group earlier this year will likely serve as the foundation of a bill to replace rules governing pensions that expire in 2014. Sen. Tom Harkin (D., Iowa), chairman of the Senate committee overseeing pension policy, called the proposals, which include cutting retiree benefits, "a starting place."

"The fact that labor and management were able to come together and agree on a comprehensive proposal to protect the pensions of millions of middle-class families is a significant development," Mr. Harkin said.

The plan is the latest to address a chunk of the nation's creaky retirement infrastructure. President Barack Obama's budget proposal this past week could also lead to a reduction in Social Security benefits for retirees. And on Monday, the Government Accountability Office said the number of insolvent multi-employer pension plans could double by 2017.

Something must be done to shore up about 10% of the roughly 1,450 multi-employer pension plans in the U.S., pension experts say. The plans, which are funded by groups of employers in construction, trucking and retail food, and pay out a monthly check known as a defined benefit, are the backbone of the retirement security for 10.3 million retirees and current workers.

More than half of such plans are funded to at least 80% of their liabilities. That is up from one out of five plans at that level in late 2008, after the stock market tanked. But a minority is in far worse shape. As many as 150 multi-employer plans are headed toward insolvency, according to government projections.

For those troubled plans, unions and employers are proposing that the Employee Retirement Income Security Act of 1974 be rewritten so that benefits for people who are already retired can be reduced. Without that fix, advocates argue, the plans will run out of money and retirees will end up with a fraction of their current benefits when the government takes over the plans.

Advocates say early cuts can stave off deeper ones down the road. Under the proposal, trustees from labor and management would determine how deeply to cut benefits to return the plans to solvency. One labor official said the cuts could take effect within a year of the decision.

The cuts would depend on each plan's finances and could reduce benefits to as little of 110% of the level guaranteed by the Pension Benefit Guaranty Corp., the federal agency that backstops private-sector pensions. The 110% level amounts to $12,870 a year for people who retire at age 65 with 30 years of service.

"What we're really trying to do is salvage the system," said Randy DeFrehn, executive director of the National Coordinating Committee for Multiemployer Plans, a nonprofit group that assembled the labor-management coalition.

The coalition is recommending additional changes to multi-employer pension plans. It is also proposing a new form of pension plan that would carry less risk for employers than a defined-benefit pension, but is designed to provide more security for retirees than a 401(k). The assets are pooled, rather than held in individual accounts, reducing the investment risk to retirees. Employers would contribute a negotiated amount but wouldn't be liable for additional payments if funding levels dropped, as they currently are with multiemployer pensions.

Mr. DeFrehn said cutting retiree benefits is the controversial proposal, but noted that lawmakers have said they don't intend to bail out the pension plans. "This is kind of a reverse bailout," he said. "It shifts a lot of liabilities away from the public sector and the taxpayer."

Retiree advocates are raising red flags. Karen Ferguson, director of Pension Rights Center, a Washington, D.C., group that advocates for employees and retirees, said the union and management interest in the long-term survival of plans might conflict with the interests of older retirees who can't afford to lose their income now. She saidshe thinks legislation should make sure retirees have input in the cuts, and that Congress should consider alternatives to the cuts.

Greg Smith, 64 years old, a Norton, Ohio, truck driver who retired in 2011 after working 31 years, agrees. He now receives a monthly check for $3,019 from a Teamsters pension plan that is projected to become insolvent in 2024. If that happens, the PBGC would take over and his benefit could be cut to as low as $1,100 a month.

Under the new proposal, his benefits could be trimmed before funds run out, giving the plan's investments a chance to recover in the market. His benefits would be guaranteed not to fall below $1,210 a month, 110% of the PBGC level.

"It's a precarious position for a lot of us retirees," Mr. Smith said. "Let's come up with a plan that doesn't trash the retirees and put them in the poorhouse."

A spokeswoman for the Teamsters, which participated in the coalition, declined to comment on the plan or whether the union endorses it.

David Blitzstein, who oversees multi-employer plans for United Food and Commercial Workers, said cutting benefits remains controversial for unions, companies and members of Congress. He participated in the 18 months of talks that led to the proposals. "It was a very tough bullet to bite for everyone in the room," he said. Mr. Blitzstein said the majority of unions in the coalition supported cutting retiree benefits. The UFCW has openly endorsed it. It has retirees in about 60 multi-employer plans, covering 1.4 million people. He said cutting retiree benefits could be the only way to save about five deeply troubled plans, and added that it wasn't clear how much benefits would have to be cut. "We haven't modeled it yet in some of these really sick plans."

Over time, numerous factors have hurt the ability of plans to fund benefits. Bankruptcies have cut the number of employers paying into some plans, economic downturns hurt investment returns, and some policy decisions intended to strengthen plans ended up weakening them.

The first multi-employer plans were created during World War II, when wages were controlled by the War Labor Board. Pensions were offered to unions as a trade-off. They were among "fringe benefits." At first, company contributions were the sole source of income. Funding problems in the 1960s were addressed by the passage of Erisa in 1974, which required advance funding, and investments became the main funding source.

By the 1980s, some plans were so well-funded that companies risked losing the tax-exempt status of contributions. They responded by increasing benefits for retirees to levels that have never been reduced. Multi-employer plans recovered from the bursting of the tech bubble in 2000 and the median plan was 90% funded in 2007. But they were devastated by the 2008 market crash.

Now it's harder to make a comeback because plans' recent investment gains are based on a smaller asset base. Contributions by employers are made per hour worked, and have lagged behind as employment has remained weak. Many plans are starting to have more retirees drawing benefits than active workers. Some companies have paid a penalty to withdraw from plans to get the liability off their books, leaving fewer employers paying into plans.

Big and small companies now say their future is threatened by underfunded plans. The problem is also holding down wages and benefits for current workers in industries like trucking.

Judy McReynolds, president and chief executive of Arkansas Best Corp., ABFS -1.37%is among executives who back the coalition's proposals. The company's ABF Freight System unit participates in 25 multi-employer plans, and has 7,500 Teamster employees, two-thirds of whom are enrolled in troubled plans. She said half of ABF's annual pension contributions of $132 million are for people who never worked for the company, and that its contributions are 14 times greater than those of competitors. "This is not sustainable," she said. "It is imperative that we find concrete solutions."

Write to Kris Maher at kris.maher [at] wsj.com

A version of this article appeared April 13, 2013, on page A2 in the U.S. edition of The Wall Street Journal, with the headline: Union-Employer Proposal Would Hit Some Retirees