Some 500 Teamster retirees, actives and spouses jammed a union hall in South St. Paul Minnesota in support of the Butch Lewis bill to save pensions in jeopardy. 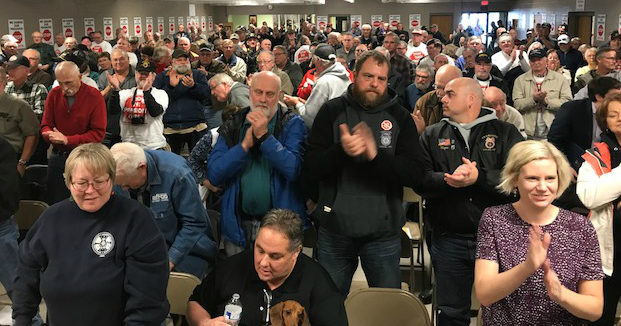 The overflow crowd heard a series of speakers including U.S. Reps. Rick Nolan and Tim Walz, both from Minnesota, and Minnesota Attorney General Lori Swanson. U.S. Senator Amy Klobuchar prepared a special video which was shown on large screens at the rally.

Hundreds signed the national petition in support of the bill and were given flyers with Minnesota’s congressional delegation and their phone numbers. Speakers including Klobuchar urged the workers to call all their Congresspeople.

Other speakers included the heads of the AFL-CIO regional labor federations in Minneapolis and St Paul, the Minnesota Nurses Association and the AARP.

Sherman Liimatainen, the retired Duluth Teamster officer who is a leader of the National United Committee to Protect Pensions (NUCPP), outlined latest developments.

The rally was sponsored by Save Our Pensions—Minnesota, an affiliate of the NUCPP. The group has been sponsoring actions and rallies for more than 3 years.