January 11, 2013: In the early 1900s workers in the textile mills of Lawrence, Massachusetts faced terrible working conditions toiling away 60 hours a week for very little pay. They were lodged in substandard and unaffordable housing and faced extreme poverty. These workers were largely immigrants, most of them women, even some children. 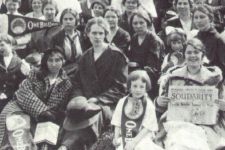 For years the conditions continuously worsened. The workers decided they had enough and started to organize their neighborhoods block-by-block, and with the Industrial Workers of the World.

Then on January 11, 1912, a law was passed in Massachusetts that shortened the work week, reducing weekly pay as a result. This meant that dinner wasn't going to be on the table some nights.

For a community already suffering from malnutrition, this was the final straw that sparked the historic "Bread & Roses Strike" 101 years ago today. 25,000 workers went on strike. The strike lasted 9 weeks, cost 2 lives, and over $1 million dollars. 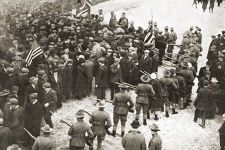 By organizing together the workers were able to win wage increases, overtime pay, and no discrimination for strike activity. The bravery and militancy demonstrated by these women, children and men contributed to the strength of the early labor movement in the U.S., setting the stage for unions today.

We honor their memory by working together to build a stronger and more democratic labor movement, which benefits all working people.

Click here to read more about the Bread & Roses Strike.