When TDU was founded in 1976, Teamster members didn’t have the right to vote for top officers and the union was controlled by organized crime. 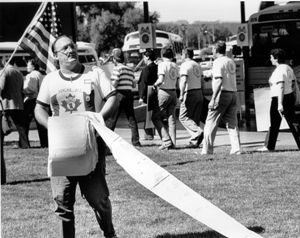 Then in 1988, the Justice Department went to court against the union’s leadership under the Racketeer Influenced and Corrupt Organizations Act (RICO). The suit stated that “the IBT has made a devil’s pact with La Cosa Nostra.” They proposed a federal trusteeship. TDU strongly opposed a government takeover. TDU’s position was that the best anti-corruption program would be to give members the Right to Vote.

When the RICO suit was announced, TDU National Organizer Ken Paff wrote the U.S. Attorney General saying “there is only one ‘reorganization’ under RICO that the government can effectively take: namely, to direct the IBT to hold rank-and-file elections.”

On March 13, 1989, one day before the trial started, the Justice Department reached an agreement with the IBT to settle the RICO suit. It established a court supervised Independent Review Board to clean out corruption. Most important, it provided for the direct election of Teamster officers by Teamster members, with an impartial Election Supervisor.

TDU’s position against government trusteeship and for the right to vote had prevailed.

In 2011, TDU is celebrating 35 years of fighting for a stronger union.