22 Years of Fighting for a Stronger Local 814

November 3, 2009: Commercial mover Walter Taylor has been fighting for a stronger Local 814 since 1987. His efforts bore fruit in their 2009 election when Local 814 voted 72% for new leadership. 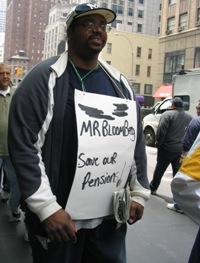 TDU interviewed Walter about how they made it happen.

I didn’t choose activism. I guess you could say activism chose me.

I got my union card in 1987. The first company I worked for started adding people to the seniority list.

There was a list of 32 names—and my name wasn’t there. I had been working there for a lot longer than other guys. Apparently the foreman decided to only put white guys on the list.

I called the shop steward. He filed a grievance. Then he called me and said I won. But I was put on the bottom of the list.

I filed another grievance. They kept telling me “these things take time.” After a while, my time ran out. I had to learn the hard way that you can’t always trust your union officials.

The problem hasn't gone away. There's one employer I worked for all the time. But when I helped members get on the seniority list there, they stopped giving me work and they cut off another friend of mine who also just happens to be African American at exactly the same time. Unfortunately racism still plays a factor in this industry.

How did you hear about Teamsters for a Democratic Union?

Years ago, a slate formed to run against Bobbie Corbett, the head of the union at the time. I helped out. The slate didn’t win, but one of the older guys told me: “If you ever need any help, just call TDU.”

A few years later, our local came to us with a Moving and Storage contract full of concessions. We came to TDU for help.

TDU helped us put together a contract campaign. We passed out flyers explaining the problems with the contract. Members voted No and the local put us out on strike.

We asked the local what the plan was to win. The local told us: “You’re the guys out on strike. We’re still working.” There was no plan at all. So we turned to TDU again.

TDU helped us get organized. We organized a phone tree and shut down 26 shops in 2 days. We avoided a lot of the worst concessions. After I saw TDU in action, I became a member.

TDU members worked together to organize another Vote No campaign against contract concessions in 2005. It was the worst contract ever—a five year deal. That’s the contract we’re under now. It was clear after that they we needed to get new leadership.

I ran three years ago for the top spot in the local. We didn’t win. But we had a respectable showing. And we learned a lot about how to run a campaign.

This is a big victory. How did it happen?

I was sold on running Jason Ide from the get-go. He was my pick because he ran the first successful contract campaign in Local 814.

I knew it would take support from a lot of guys. So I reached out to other companies for support. Our contract is up next year. Members were ready for change and a new direction.

We put together a good team. Jason was a great top candidate. They took the ball and ran with it. We built up our phone list. We got pictures of members to endorse our slate. We sent out mailers. We got a lot of good advice from TDU.

What would you say to other Black Teamsters who want to be leaders like you in our union?

Local 814 always operated like a club. It was all about who you knew.

If you’re going to survive that and change it, you can’t do it alone. You need other people who will fight with you. I got that from TDU.

It’s easy to get lost, easy to get frustrated. It took me 22 years of fighting. I could have walked away any time. But I was stubborn.

Now I want our union to be an example of how it’s really supposed to be done. We’re going to include the members, and let everyone have a voice.