June 10, 2013: ABF Teamsters have their ballots and are voting. Just as importantly, they are discussing the proposed concessions and the future of Teamsters at ABF.

Some are outspoken that the concessions go too far. "They say we catch up over the life of the contract but that just gets us back to where we stand now. With the cost of living rising over the next five years, we gain nothing," commented Emmet Ramsay, a road driver out of Winston-Salem. "I vote Hell No on this contract." 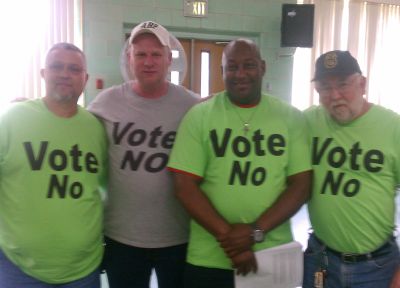 The Atlanta road stewards are sporting Vote No shirts. They wore them to their Local 728 meeting and many are wearing them out on the road.

Meanwhile, the Hoffa administration is selling the agreement and also creating some confusion with their incompetence. The ballot instructions actually state "a No vote on the blue ballot is a vote to accept the proposed ABF National Master Freight Agreement." (!!)

They can't check the wording in the ballot mailing; perhaps that explains why they didn't notice the new language in the tentative agreement giving the company the power to use any electronic device to fire or suspend Teamsters without warning and without corroboration.

The Hoffa Administration has seized control of the independent Chicago Local 705 and 710 contracts with ABF, dissolved their contracts, and merged them into the national contract vote.

Hoffa and Gordon Sweeton know that Local 705 and Local 710 members will not vote for concessions.

James Hoffa Sr. signed the first National Master Freight Agreement in 1964. His son has killed it. Now he has killed another tradition: the independent power of the big Chicago locals, which often have taken stronger Teamster positions.

The ballots are due back on June 27. Teamsters who need a duplicate ballot should contact their local union as soon as possible. There will be independent rank and file observers at the ballot count.

Key changes in the proposed Tentative Agreement include:

There are additional changes in the supplements.

Read the agreement. Discuss it with your fellow Teamsters. Cast your vote.