In March, the Local 355 fund cut the annual accrual rate to zero. That means members’ pensions are frozen and they are not earning any new benefits for hours worked since March 1.

A Plan for Improvements?

At the meeting, pension attorney Ann Curry Thompson explained how the new rules in the Pension Protection Act affect the fund, and Local 355 feeder driver Gary Payne talked about how members were kept in the dark while the funds’ investments under-performed year after year.

With the help of Teamsters for a Democratic Union, members have acquired documents from January recommending the pension cut. In the document, the plan’s actuary warned that “without any changes in benefits or contributions the plan is expected to be in the ‘Red Zone.’”

But the report does not make projections on how the cuts will impact the fund.

“It’s up to our union leaders to have a plan for restoring the benefits,” said Payne. “But they have no plan.” The fund has sent Payne a letter stating that the fund is now in the Green Zone, but they do not say when they will improve the benefits.

Now members are working with Thompson to request new documents projecting how the cuts will affect the benefit fund.

Click here to view the letter stating the fund is in the Green Zone.

A Pension Bill of Rights

At the end of the meeting, UPS Teamster Ron Reinhardt talked about what members can do to win benefit improvements. “We’ve got to talk to more members and spread the word to get this job done,” Reinhardt said.

“Already just a few of us have been able to get more pension info from our union than they would have ever given us on their own. Imagine what we can accomplish if more members speak out and get involved.” 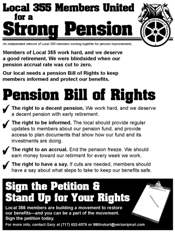 Members are circulating a petition demanding a Pension Bill of Rights that would guarantee:

Click here to download a copy of the Pension Bill of Rights that Local 355 Teamsters are circulating.

Tell us what you think. Click here to ask a question or to let us know how you can help.