May 20, 2015:  Sometime this summer nearly 400,000 Teamsters and  retirees will be mailed a ballot, asking them to approve  cutting their own pension. 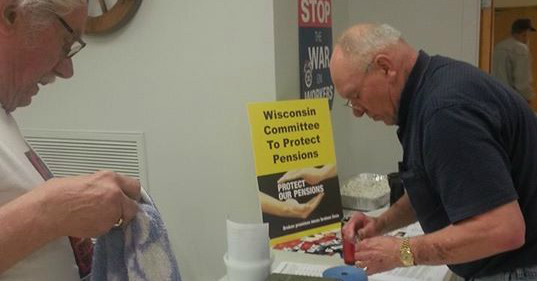 That vote is our voice. Use it to Vote No  to demand improvements in the Central States  pension cut plan.

Central States will try to pressure Teamsters  into voting yes for cuts—starting with scare  tactics. They will tell us if we Vote No and delay  the cuts for even a month, then the cuts will be  much worse. That is not true.
Of course, decisive action is required. The  fund is in trouble, but it is not on the brink of  insolvency. The numbers do not justify a rush to  judgement, not when the retirement of nearly  400,000 Teamsters who earned their pensions is  on the line.
Central States will also play divide-andconquer— and try to pit the active 65,000  working Teamsters versus the 202,000 retirees.  (There is also a large third group who have a  vested right to a pension but not yet collecting.)
Central States will tell working Teamsters that  the only way to defend their pensions is to vote  for deep cuts and throw retirees under the bus.
That’s not unionism; it’s cynicism. But there’s  an alternative.
Nearly 400,000 Central States participants get  to vote on the cuts. Together, we can have a  powerful voice.
The Save Our Pensions movement is uniting  Teamsters and retirees together to win improvements  in the Central States pension cut plan.
We are joining forces with AARP, other  unions, the Pension Rights Center and union  allies to support a pension relief bill in  Congress.
We worked our whole lives for our  pensions—now we are working together to  defend them.
That includes Voting No to reject the Central  States fast track pension cut plan.
news Pension Pension Crisis Teamster Voice 293 Summer 2015
Do you like this post?
Tweet
Get Advice Join TDU Donate