June 4, 2010: In 2006, BLET members voted two-to-one for the Right to Vote for top officers. But now some officials are trying to take it away—and they’re one step closer to their goal.

Last December, a few BLET officials put forward an initiative to reverse the membership vote and take away the Right to Vote.

To get past the first hurdle with their anti-democracy initiative, these officials had to get divisions representing 25 percent of the membership to endorse the initiative. They’ve reportedly succeeded—at least in round one.

Now the opponents of democracy have to get over a much bigger hurdle. This month, the entire membership of the BLET will be mailed a ballot to vote on whether or not they want to give up the Right to Vote.

The timing couldn’t be better for officers who want to avoid having an election. The first ever one-member, one-vote election is scheduled for this November. In April, rank-and-file member Tom Brennan announced his candidacy for the top spot. And this week, BLET President Paul Sorrow announced he’s stepping down in July.

Sorrow is the third BLET president to resign since 2006. His last two predecessors resigned in disgrace: Don Hahs embezzled tens of thousands of dues money, and Ed Rodzwicz solicited a $20,000 bribe from an attorney. 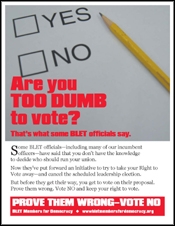 In 2006, Sorrow’s replacement, Dennis Pierce, actively campaigned against the Right to Vote. Is he hoping to hold on to his new office without a vote of the entire membership?

BLET members have put out a new flyer asking members “Are you TOO DUMB to vote?” Click here to download the flyer.