BLETers Team Up to Save the Right to Vote

January 29, 2010: Some rail officials are trying to take away the Right to Vote for BLET officers before members ever get a chance to use it.

Now members are coming together to save the Right to Vote. 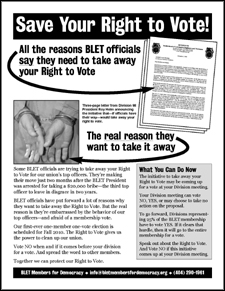 The Brotherhood of Locomotive Engineers and Trainmen (BLET), now part of the Teamsters, is one of the oldest unions in the U.S. But they’ve never had a rank-and-file election for their top officers—until now.

The first ever one-member, one-vote election for BLET top officers is scheduled for this fall.

But that election won’t happen if some BLET officials get their way.

In December, BLET divisions 13, 98, 155, and 236 circulated a petition to overturn the new voting system. And they’re hoping to get it passed before the first election can happen.

Their goal is to let the delegates to the BLET convention choose the union’s top officers—the union’s old system for choosing officers.

Why? They say that elections cost too much, that members don’t vote, and that delegates are more informed than average members and will make better decisions.

Was the old system better? Three of the last top officers chosen by the delegates at the last convention are now gone in disgrace—including two presidents. Police arrested the last president, Ed Rodzwicz, at his home for taking a $20,000 bribe from a union attorney.

To pass, the initiative will have to clear three hurdles.

First, divisions representing 25 percent of the BLET membership have to take action at a meeting to support the initiative.

If it doesn’t get that support in six months, the initiative dies.

If it clears that hurdle, a ballot will be sent to every member to vote on the initiative.

Finally, if a majority of voters agree to give up their Right to Vote, Hoffa will get a say. The Teamster General President must approve the initiative for it to take effect.

Hoffa has the power to stop the takeaway and save members’ Right to Vote right now by promising not to approve the initiative.

Rank-and-file members and local officers are getting organized to save the Right to Vote.

They’ve formed BLET Members for Democracy, and they’re organizing conference calls, distributing flyers and a four-page Q&A, and getting members to sign a petition to save the Right to Vote.

Most divisions have not considered the measure yet. You can help save the Right to Vote. Download flyers, the Q&A, and the petition at www.tdu.org/blet-vote