Carhaulers Look Toward the Future

November 14, 2008: In August, Teamster carhaulers stood up, said No to concessions and won an improved contract as a result. But there’s more work to be done.

Carhaulers who are upset with the direction of our industry aren’t giving up. We’re getting organized.

Teamster carhaulers who are upset with the direction of our industry met at the TDU Convention in October to make plans to do something about it. 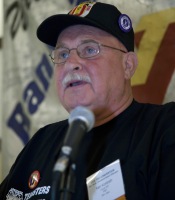 Ken Kontrath speaks to the TDU Convention.“We learned in 2008 that carhaulers can have power when we get informed, spread the word and work together,” said Ken Kontrath, a PMT driver in San Jose Local 287. “But we also learned that we could achieve a whole lot more if we don’t wait till the last minute. We won’t make that mistake again.”

The TDU Carhaul Committee is making plans to bring members together in 2009 to enforce our contract, bring Allied back up to full scale, prepare for the next contract just over two years away, and lay the basis for organizing the nonunion competition in the industry.

“We’re going to continue to hold conference calls and meetings to share information nationwide,” said Matt Studd. “Teamsters for a Democratic Union has been there with information and resources for carhaulers who want a new direction.”

“For all my fellow Teamsters who agree that our union is not where it should be, I challenge you to step up and do what’s right: join TDU.”