December 21, 2007: With little support from their outgoing officers, Teamsters at the University of Chicago have won some improvements after voting down their tentative agreement twice.

On Friday, members voted to accept a new tentative agreement. 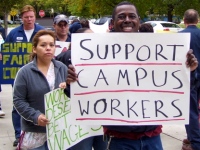 Local 743 members and students worked together to win a stronger contract.“The union and the company told us this was the best deal they could offer us, but each time we voted down the deal, they made improvements,” said Joe Sexauer, a member of Local 743 at the University. Local 743 represents 1,100 clerical and maintenance workers at UofC.

In September, members voted the first agreement down 533 to 47. They voted the second offer down by 58 percent. The union gave the members only a few days notice before each vote.

Members made the biggest improvement in wages. Management insisted they could only afford a 10 percent increase over the life of the contract. By holding out, members pushed their raise up to 10.5 percent.

Rank-and-file members held lunchtime meetings and picnics to push for a stronger agreement, and they reached out to SEIU and other unions on campus for support.

“I’m proud of our members for holding out for a better deal,” said Sexauer. “We’re laying the foundation for having a stronger union at the University. We’ve built a new network, we’ve got momentum, and we have new officers.”