UPDATED September 18, 2012: Chicago teachers are returning to the classroom after staging a united strike to protect teachers' jobs and improve education for Chicago's children. The union's 800-member council of delegates debated the tentative agreement and voted today to suspend the strike. The 29,000 members will vote on the contract at a later date.

A news update is available here.

UPDATED September 17, 2012: Delegates of the Chicago Teachers Union voted to continue their strike yesterday. They will reconvene on Tuesday afternoon, after they've had a chance to head back to the picket lines and discuss the situation with the union membership.

They are striking primarily over better education for kids, including smaller class sizes. They are also striking to protect job security: the mayor wants to be able to fire teachers based on test scores, which reflect a lot more than the skill of the teacher, especially in poor areas. Mayor Rahm Emanuel is claiming the strike is all about salaries, but union president Karen Lewis says the sides are actually close to agreement on salaries.

The union has worked for months to build support from the community and parents. Apparently it has paid off, as a poll published yesterday by the Chicago Sun Times showed that more Chicagoans support the teachers' union than support the mayor. 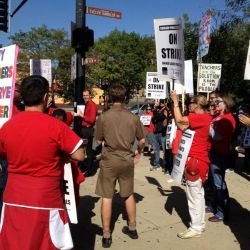 Teamsters are offering support and solidarity. Chicago Teamsters Local 705 has loaned space in "Teamster City" for the Chicago Teachers Union (CTU) to use as their strike headquarters. One CTU striker captured this photo of a UPSer who jumped off his truck and onto the megaphone to voice his support.

The picket lines are very well staffed and active, with support from students, parents, community members, unions, and other allies who show their solidarity by joining the picket lines, or by "buying a teacher a lunch," running online blogs with pictures and statements of support, and holding solidarity rallies in cities around the country. See more on solidarity here.

To stay up with the latest information on the strike, click here to visit CTU's "Strike Central."