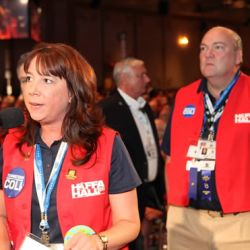 The losers in Coli's latest power grab are the Teamsters who work for the City of Chicago, Cook County and other public entities.

Coli and Strzechowski are now positioned to trade concessions to politicians in exchange for perks, appointments and political deals.

Coli created Local 700 in 2010, merging together Local 726 (mostly Chicago city employees) and the corrections and law enforcement units of Local 714, the old Hogan family local, which was dissolved. Local 700 became one of the largest public sector worker locals in the Teamsters.

Coli installed his long-time employee and associate, Strzechowski, into leadership. He appointed a second assistant trustee, Billy Logan. But Strzechowski couldn't win an election there, so she ran for the number two spot on a slate headed by Logan.

The takeover happened when Coli and Strzechowski pressured Local 700 President Billy Logan to resign, and he did so. Executive Board members initially resisted the takeover. Coli countered by having Hoffa assign a personal rep, threatening internal union charges and dangling job offers as carrots. Most of the resistance crumbled at that point.

Local 700 members have the power to take back their union and elect officers who serve the members, not the Coli family. The next election is just two years away

Also in August, Joint Council 65, covering the locals in Illinois outside the Chicago area, dissolved into Joint Council 25. Coli's Joint Council now has another nine locals and 16,000 members.