June 12, 2013: UPS and UPS Freight Teamsters are in a final push to get out the vote on the proposed contracts.

Contract ballots must be received by 10:00 a.m. on Thursday, June 20. There's still time to vote and to make sure other UPS Teamsters mail in their ballots and have their say. 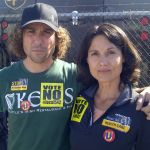 Angry Teamsters at both UPS and UPS Freight are organizing a No Vote in many areas.

In San Diego, members are passing out leaflets at the gates to urge members to Vote No and stop changes in their healthcare plan.

In Louisville, TDU members David Thornsberry and Zach Pfeiffer organized a Vote No rally that built Teamster solidarity and caught the attention of the media. The Local 89 Executive Board is actively opposing the contract at the gates and in the media. 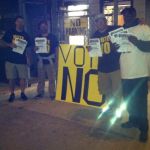 In Philadelphia, members are pushing for a No Vote on the national contract and their supplement to defend their healthcare and demand improvements in the supplement including more full-time jobs at the Philadelphia Airport.

A Vote No on the UPS Contract Facebook page continues to grow and give concerned UPS Teamsters a forum to speak out.

Teamsters for a Democratic Union works to enforce the rights of all members to a fair and informed vote, regardless of how you intend to vote. Rank-and-file observers from both UPS and UPS Freight will be present at the vote count.

UPS and UPS Freight Teamsters who value an independent information source and nationwide rank-and-file network are joining TDU. You can too for just $40 a year.

We urge all UPS and UPS Freight Teamsters to discuss the issues and vote on the contract.