Done Riding in the Back of the Bus 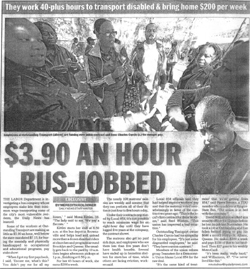 Now they’re uniting with TDU to enforce their rights and win the pay they deserve.

The Department of Labor is investigating outrageous wage and hour violations at a Brooklyn-based bus company represented by Teamsters Local 854.

Under their Teamster contract at Outstanding Transportation, bus aides, called matrons, make as little as $175 a week to monitor the safety of the physically and mentally disabled adults they transport every day to programs around the city.

The contract defines the work week as 40 hours in five days. The company claims that matrons work only five hours a day. The matrons, who are tracking their working hours, say they work much more.

“It’s not fair, and we’re coming together to enforce our rights,” said Kim Session, a shop steward at Outstanding. “If we don’t stand up for ourselves, we can’t get what we deserve. TDU has opened our eyes and we’re more united than ever before.”

Members from other Local 854 bus companies and other concerned TDU members reached out to the workers at Outstanding with leaflets.

More than 90 members attended an organizing meeting. Workers formed a committee to keep members informed and mobilized to enforce their rights.

Dozens of workers have testified as part of the DOL investigation. And more than 100 drivers and matrons have signed group grievances demanding minimum wage, overtime, and extra pay for field trips which is guaranteed in the contract.

The Daily News, one of New York’s biggest papers, has run a series of exposes on the scandal.

Under state wage and hour laws, the Teamster bus matrons at Outstanding are entitled to weekly pay of $315 for a 40-hour week—$140 more than the starting pay of $175 a week in the union contract. Teamster drivers at Outstanding make as little as $360 a week.

Some drivers and matrons work more than 40 hours a week—with no overtime pay. In addition to doing morning and afternoon runs, they do field trips in the middle of their work day.

“Sometimes I work four field trips a week, plus Saturdays,” said bus aide Elaine Mallard. Even when she works six days, Mallard is paid less than minimum wage and gets no overtime pay. She has been a Teamster for nearly three years.

The company, of course, denies it is doing anything wrong. They have even denied that the DOL is investigating. The DOL has publicly confirmed the investigation.

More incredibly, Local 854 officials have defended the situation in the press. They told the Daily News that the contract, which pays less than minimum wage, “improves a bad situation.”

“It’s the same kind of treatment that we’re getting from 854,” Pierre Jerome, a school bus driver and 854 member at Empire Bus Transit, told the Daily News. “The union is in bed with company.”

Jerome, a TDU member, helped workers at Outstanding start organizing. His boss at Empire, John Curcio, is the father of Charles Curcio, who owns Outstanding.

Local 854 has always been a family affair. A third Curcio—Joseph Curcio—was able to organize into Local 854 because of his relationships with organized crime family members. This is according to a report put together by former federal prosecutor and Teamster anti-corruption watchdog Ed Stier.

Today, the mobsters who controlled Local 854 are dead. But the Curcio family continues to dominate Local 854—employing many of the local’s 2,500 members under substandard contracts.

With the help of TDU, workers at all of the companies owned by the Curcios are uniting for change.

“The companies and our own union have treated us like second-class citizens for too long,” said Angel Garces, a TDU member at Consolidated Bus Transit. “It’s time for change.”