Done Sitting at the Back of the Bus

June 22, 2012: Thousands of New York City school bus drivers and aides safely transport kids every day. But many Teamsters work under substandard contracts with lower wages and benefits than other workers in their same industry, and even in their same union.

Local 854 drivers and school aides are working to change that. Workers at Empire State/Allied Bus Corporation started their campaign for a fair contract by circulating a membership survey to get members talking about the contract and find out the most important issues.

"The survey helped us reach out and get members talking," said TDU member and driver Pierre Jerome. "We collected phone numbers and emails and found members who want to get more involved in helping win a better contract."

For the first time Local 854 officials held a union meeting in Brooklyn—and members turned out to talk about the contract.

The bargaining committee has adopted the bargaining goals members defined through the survey—raising pay and bringing benefits up to the level of the top school bus contract in the local.

At present, the committee has not yet met with management.

Members know their campaign is far from over. "We don't want rumors to circulate and workers to be pitted against one another," said driver Vadim Tsipenyuk.

"Our goal is to build unity and keep members informed at every stage. We're not looking for problems. We're just looking to have the same contract that other school bus workers in our local do. That's not too much to ask." 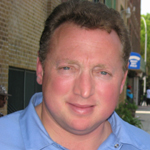 We Only Want What's Fair

"Our goal is to build unity and keep members informed at every stage.

"We're not looking for problems. We're just looking to have the same contract that other school bus workers in our local do. That's not too much to ask."