March 25, 2011: Support Teamsters warehouse workers and drivers who are fighting for their jobs. 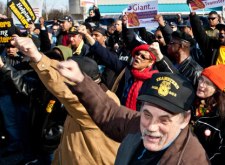 If C&S isn’t stopped, 650 Teamsters will lose their jobs.

The workers at Giant deserve the full support of every Teamster member—and the full backing of our International Union.

C&S first announced its plans to eliminate these Teamster jobs and move the work to nonunion facilities in Pennsylvania and Chester, N.Y. in April, 2010.

Teamster local unions mobilized to take on the nonunion threat and asked the IBT for support. But, the Hoffa administration dragged its feet for a year.

The International Union has finally helped launch a website called “Justice at Giant”—promising a Labor/Community campaign to save these Teamster jobs. However last-minute, this campaign deserves our support.

A Plan to Win

Our union can fight back and win against C&S. But local union mobilization has to be backed by real resources, not lip service, from the IBT.

C&S is a third-party provider. Grocery chains hire C&S to run their warehouse distribution work on the cheap. But grocery chains can also drop C&S if it becomes a liability to their stores.

The stores are the weak link in the chain and have to be the focus of any successful campaign.

A coalition of local unions came together last year to take on the nonunion C&S threat. Teamsters began leafleting A&P, Pathmark and other stores to put pressure on C&S by reaching out to customers.

The campaign started to work. Store managers complained to the chains to do something about the C&S problem that was costing them customers.

A leaflet has been produced to distribute to customers at Giant. Click here to read it.

To be fully effective, a leafleting campaign has to be chain-wide, sustainable and linked with an effective corporate campaign that threatens the chain’s brand name—whether that’s A&P, Pathmark, Giant, Tops, or Stop n Shop.

That means the International Union has to lead the charge and back up local Teamsters, not leave them hanging in the breeze.