Freight Teamsters: Don’t Just Get Mad. Get Even.

March 25, 2011: Freight Teamsters are angry. Some have given up hope. Others want to know “what can we do?”

And that is the right question to ask. 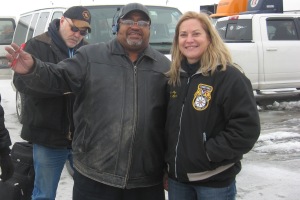 Sandy Pope meets with YRC Teamsters in ChicagoThe latest insult heaped on freight Teamsters is the big pension cut for YRC workers from the Central States Fund, and likely from other pension funds as well.

This comes after twelve years of neglect, mismanagement, and PR from Hoffa.

Members built this union. It’s up to us to save it. Here’s where to start:

1. Demand accountability from the IBT. Call your local union officers and ask them to demand that the IBT fight these cuts, and demand that YRC and Holland agree to allow recently retired workers to come back with their seniority, if their pensions have been stripped from them.

2. Help Hoffa retire. Be part of the Sandy Pope campaign. Sandy Pope started out in freight, worked with freight leader Sam Theodus, and knows how to win. You can join her team here.

3. Join Teamsters for a Democratic Union. Help be part of making things change for the better. Whether it is action to protect and restore pensions, getting information out to Teamsters, or uniting a movement to change the Teamster leadership, TDU is a must-have organization. Your joining will be doing a small part, and will only set you back $40. You can do it right now, right here.