December 28, 2010: Teamsters are uniting to save 1,000 union grocery jobs in New Jersey and defend Teamster warehouse distribution standards across the Northeast. 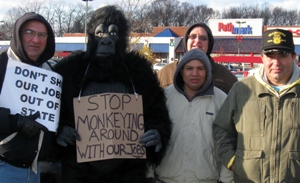 Teamster members are uniting to defend union jobs and stand up to C&S, the biggest nonunion grocery competitor in the Northeast.

C&S has issued a WARN Act notice to 1,000 Teamsters in New Jersey. Management’s plan is to outsource Teamster warehouse distribution jobs to nonunion C&S facilities in Pennsylvania and Chester, N.Y.

The move is part of a broader attack on Teamster jobs by C&S, the largest nonunion competitor in the Northeast. Teamsters from Rhode Island to D.C are being threatened because warehouse distribution jobs are being moved to nonunion C&S operations.

Teamster jobs have been lost at Stop & Shop Teamsters in Boston Local 25 and White Rose in three New Jersey and New York locals.

But Grocery Teamsters are fighting back. Led by Local 863 in New Jersey, Teamsters are putting pressure on C&S by leafleting A&P, Pathmark and Food Emporium to warn customers about the destruction of good jobs at the worst possible time for our communities.

Other locals across the Northeast are working together in this effort.

In an expected move, A&P declared bankruptcy in December. But the fight to save Teamster jobs continues. A&P’s warehouse distribution operations in New Jersey have long been outsourced to C&S—and C&S is going to continue performing that work.

The question is whether those C&S jobs will be good Teamsters jobs—or nonunion jobs with low wages and benefits.

New Jersey C&S is the biggest concentration of union jobs at the mostly nonunion C&S. A battle line has been drawn. Teamster jobs and industry standards across the Northeast are at risk.

The full weight of the International Union needs to be put behind the local unions and members who are fighting for their future.