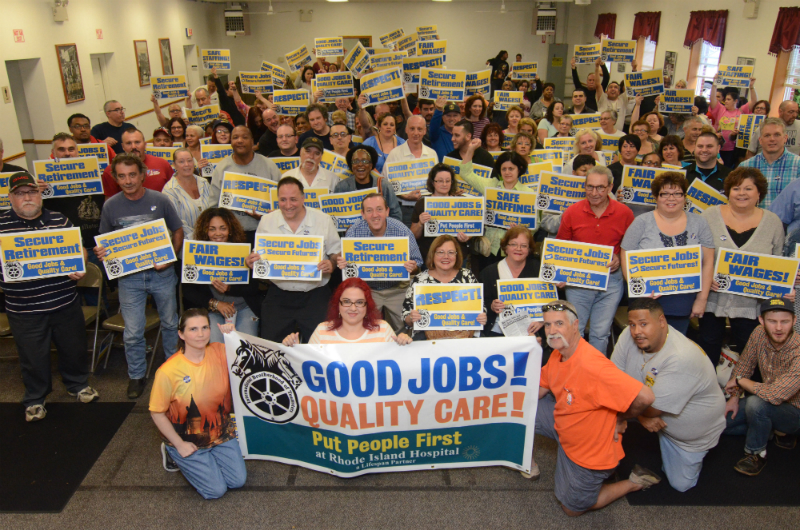 Now 2,500 Local 251 members who work at Rhode Island Hospital are taking that grassroots approach to the bargaining table in a campaign to win a fair contract.
Their contract demands include wage increases, better retirement benefits, and job security.
Union contract proposals address problems that undermine working conditions and patient care at the same time, including inadequate equipment and short staffing.
As a nonprofit, Rhode Island Hospital is supposed to put the healthcare needs of the community first.
But while Lifespan paid just ten executives more than $16.6 million, they’ve implemented cost-cutting measures, causing shortages in equipment and staff that undermine patient care.
To address these issues and win a fair contract, Local 251 is teaming up with community allies in a campaign to win a Fair Contract, Good Jobs & Quality Care.
As we go to press, members are organizing a Worker & Community Speak-Out that will bring together hospital Teamsters, community groups, religious leaders, labor activists, elected officials, and concerned members of the public.
“We need good jobs in our community and we need good healthcare too,” said Armando Brasil, a negotiating committee member.
“By mobilizing ourselves and uniting with the public, we can win a fair contract, good jobs in our community, and better care for the patients,” Brasil said.
Sign up for email updates at www.tdu.org and like us on facebook.
news Public Sector Teamster Voice 292 January-February2015
Do you like this post?
Tweet
Get Advice Join TDU Donate